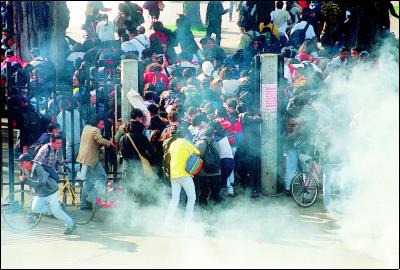 Wednesday, Carlos Geovanny Blanco Leguízamo, medicine student at Colombia National University, was shot dead during an anti-war protest in Bogota, Colombia. A group of students were protesting the bombings in Afganistan when police repressed the demo with violence. A group of students were confronting police forces who had invaded university campus when Carlos was shot at around noon. Police commander denies police are responsible for the
shooting but a number of witnesses confirm the shot came from behind police lines. Police occupied the campus for the whole afternoon. By night a lot of students were camping in the university and preparing protests for
Thursday. Corporate media has just ignored the episode.

Demand that this be covered!

I just had a look, and this news has been published at
indymedia central as well.

Email the UK media and put pressure on them to cover this event. In parallel, post to newsgroups and mailing lists and try to get this information out.

Can other people please post other email addresses please?

All hell is going down in Colombia. Nearly 200 trade unionists have been killed or 'disappeared' in the past few months as part of the US-backed 'Plan Colombia'. Do please protest this latest shooting; but don't leave it there, find out more, support the various solidarity campaigns if you can. More info on the 'Colombia' section at LabourNet UK website:

The sad fact is that the police, the army, guerrillas and paramilitaries are killing people every day in Colombia. Trade unionists are the most vulnerable to the US/EU-backed death squads known as the AUC. Political murders in Colombia are so frequent they have ceased to be news and anyway our government, which has allocated millions in aiding the perpetuation of the civil war, doesn't want us to hear about it.

(7.12.2001)
A Colombian student became today with arguments in
Bogotá of the police shot. A group of students of the national ones
University of (Universidad Nacional de Colombia, most important the that
few public universities) had at noon with one
Protest action against drastic measures in the Colombian
Federal state policy as well as against the imperialistic attacks in Afganistan
begun. Colombia suffers even from an indirect, but
substantial intervention of the USA by the so-called plan Colombia, that
the civil war situation in the country does not solve, but only intensifies.
Since 11 September plans exist over a direct intervention that
North American against the Guerillaorganisationen " of terror " of the
Country, with which Colombia moves into the center of the current conflict.
In addition large problems relating to domestic affairs and social come: at present become
from national page particularly within the areas health and
public education the means deleted, around the development of the police
to finance and military sector.


The student protest has a long tradition in Colombia. Since more jeher
there is those
Student of the public universities, against social
Unfairness and population-hostile policy demonstrate. It
possess however almost no articulation possibilities: Acces to that
Media did not ignore it, there them either or as revoluzionaere
Criminal (or " terrorists ") to be estigmatisiert. In addition one comes
direct threat by ultra right forces and the Paramilitarismus:
each month becomes a student or a Profesor of a public
University in the country killed, in the passed month were there four.

The today's murder did not become however from secret Todesschwadronen
committed, but of a representative of the national force. That
Proceed the police was particularly brutal: also itself after that
Death spontaneously formed, peaceful demonstration of several hundreds
A student by force became by the substantial application of traenengas,
Evacuation as well as open threat terminate. The Campus leaving students
were partly arrested, a majority had into the night up
the Unigelaeande endure. For the tomorrow's day is a protest march
planned, its process is unpredictable.

The ofizielle assertion of the studentses follows to the events.
We do not look only ways up in order to spread this message further
(with it it between massacre reports from Afganistan and Turkey
not completely is neglectable), but above all forms, like those
international community printing exercise and real solidarity
to prove can. Who suggestions, contacts and protest ideas (international
as for Colombia has), announce themselves please to


Public assertion of the studentses of the Universidad Nacional de
Colombia, seat Bogotá, on the occasion of the death of Carlo's Giovanni Blanco
Leguizamon

" today, on November 2001, of the Universidad Nacional found 7 on the Campus
de Colombia in Bogotá an action day against different political
Measures of the Colombian government as well as the USA instead of: those
Work and pension reform, the privatisation of education and
Health, the law of national security and the democracy lie
in the country, as well as the imperialistic Vogehen of the United States.
In the process this daily became a student of CARLO GIOVANNI BLANCO
LEGUIZAMON (2nd term medicine) of the national police (mobile
Anti-anti-squadronanti-squadron) murders. In addition the police arrest came
from further students, locally were and over of them
Stay we up to now no information have.

The community of the university refers a clear position: " we are
against the Kriminalisierung of the protest of the Colombian population
and above all the today's murder. " It is not correctly, the people how
To treat criminal, if it organizes itself, over against those
to demonstrate unfair policy of this state, that it ever further
into the misery leads. The today's events may not unpunished
remain, we must mobilize themselves and prevent that we in fear
and expire to despair.
The right to protest may not to be hurt and we have us
organize to defend around the rights of the Colombian nation! "

BOGOTA, Colombia (AP) - A Colombian student which shot and killed during
protest RK the national University against U.S. LED bombings in
Afghanistan and budget CUTS RK the school.
The shooting occurred during a confrontation between hooded students
throwing homemade grenades and riot policy firing tear gas into the
Bogota campus.
University Vice President Leopaldo Munera said the shot came from where
the policy were standing. He declined to identify the slain student.
The shooting came a day after Colombia's largest leftist rebel group
issued a statement condemning the U.S. LED bombing campaign, being
carried the Sept out into response to. 11 terrorist attacks into the United
States.
In August 2000, a policy more officer which killed during a similar
confrontation RK the national University during protest against
Then President Bill Clinton's visit to of Colombia.