Today, 2nd February, 50 people protested at Manchester’s Free Trade Hall, taking this unique site, if briefly, out of the hands of private developers. The original founder who intended the building for public use would have been proud. This one goes out to all people fighting for free expression and people power this weekend at the WEF protests and at the World Social Forum. (article 1) 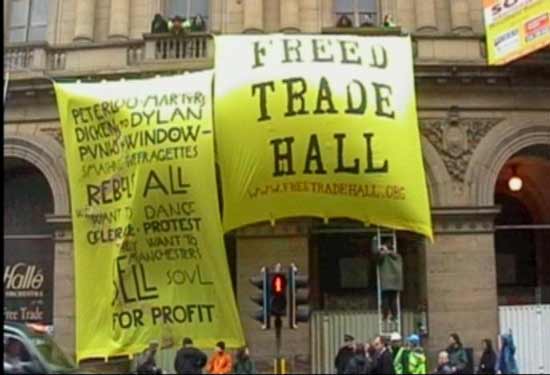 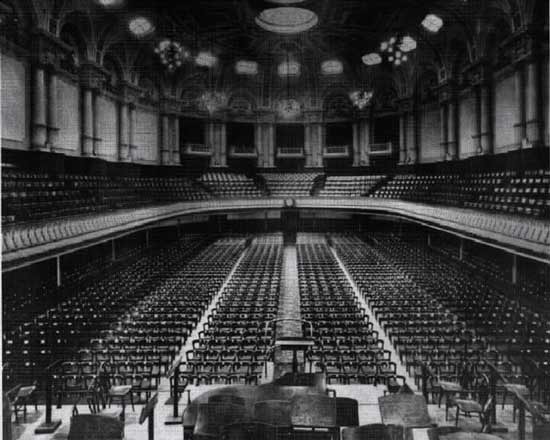 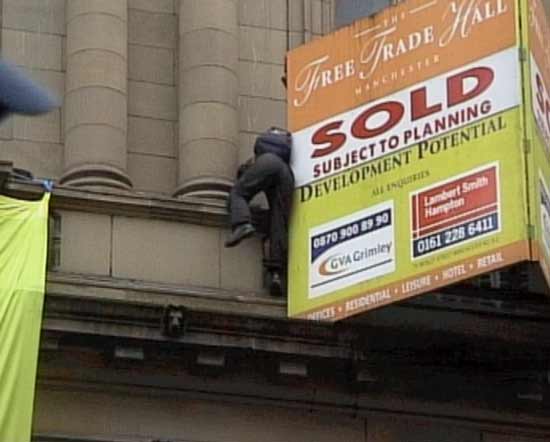 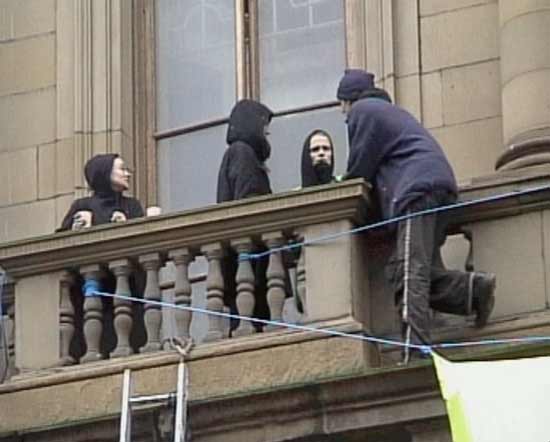 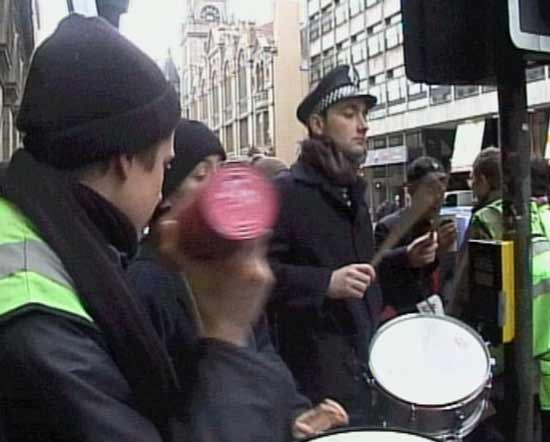 
On the site of the infamous Peterloo Massacre [1], the Free Trade Hall stands unrivalled as a key monument to the struggle for democracy. The building itself was founded in 1940 to house the great Corn Law debates of the 18th century and to provide space for Manchester people to hold political, religious and cultural public meetings [2].

The Manchester Corporation bought the Free Trade Hall from the Manchester Public Hall Company in May 1921, “so that the Hall should not be lost to citizens.” Yet more recent times have seen Manchester Council’s attitude change.

The council claims that if there were any sale agreement committing the building to public use it has been ‘mislaid’. Despite massive opposition from the city’s Civic Society [3], the council has sold the building on to a private developer to be made into a £45million luxury hotel [4]. Demolition of all but the building’s façade is due to begin in 10 days time.

Sam Hunt, one of the building’s most recent residents said:

“We are calling on people everywhere to speak up for keeping public space, starting here, with the Free Trade Hall.
This historic and unique site has been the launchpad to hear ideas and music that have shaped the world.
Surely Manchester’s prestige does not have to be built on the ruins of our history?”

The first time a ‘Votes for Women’ banner appeared in public was at the Free Trade Hall in 1905. Since then the building has been graced by a wide range of people - from the Sex Pistols, to Charles Dickens, to the Dalai Lama.

One of Bob Dylan’s first performances with an electric guitar was met with a cry from the audience of ‘Judas’ when he appeared at the Free Trade Hall. And, of course, the sound of the Halle Orchestra rang through the Hall’s corridors for years.

The Hall’s new occupiers aim to open the building to the general public and use it in the way it was originally intended, for music and meetings, and discussion of the big issues including ‘free trade’, which are re-organising the way our world works today.

[1] On 16th August 1819 the largest gathering of ordinary people at that time took place on St Peter’s Field, the site where the Free Trade Hall now stands. Approximately 60 000 people came to demonstrate for political change, including the demand that every man should have the vote. What started as a peaceful event took a turn for the worse as soldiers charged through the crowd, waving their sabres, to arrest the speakers. 11 people died and 400 were injured.

[2] When the original Free Trade Hall was created, a joint-stock company - the Manchester Public Hall Company - was officially registered with a capital of £35,000 issued in £10 shares. In the company’s deed of settlement was a clear statement of its aims:
“The subscribers being of the opinion that the providing and appropriation of a large and permanent public building in the City of Manchester for the purpose of affording accommodation for Meetings of Political, Religious, Literary and other Associations, and other meetings on public occasions and for public lectures and for concerts, exhibitions and other objects of public amusement or instruction would be of great convenience and advantage to the inhabitants of the said City and profitable to the promoters of such an undertaking, have agreed to form themselves into a Joint-Stock Company for the purpose of erecting and so appropriating such a building.”
Manchester Forum edition 21, www.manchestercivic.org.uk

[3] Manchester Civic Society has campaigned against the building’s conversion to a hotel. Their pressure led to a public enquiry in October 1998 which rejected the hotel proposal that was on the table at that time. At the public enquiry the Civic Society offered to set up a building trust which would keep the Free Trade Hall for music and for public meetings.
www.manchestercivic.org.uk

[4] The building will be transformed into a £45 million luxury hotel complex. It is to be developed by a consortium represented by 3 of the UK’s biggest contractors, Alfred McAlpine Special Projects, the O’Rourke Group and Laings and is being financed by Bank of Scotland Corporate Banking.
The hotel will open in 2004 under the management of Radisson Edwardian Hotels.
Manchester City Council still owns the land.