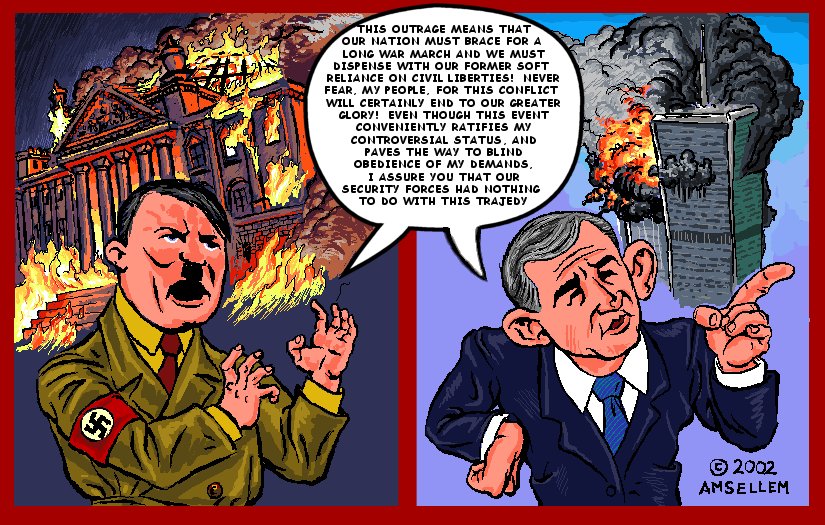 In the aftermath of the trajedies of September 11th, the Bush administration has used public sentiments over the events to legitimize his leadership. The controversial election left many americans questioning how much their vote matters after there was tampering with the electoral process in Florida where the president's brother is the governor of that state. Bush could still depend on the mainstream media for support of his programs as he appointed former Iran Contra criminals with barely a wimper from the press:

The level of overall approval of his leadership was much lower before the 9/11 atrocities. The resulting shock over these events allowed the president to pass the Patriot Act; legislation that further sweeps away what was left of our civil liberties after the Clinton administration passed anti terrorism legislation in the wake of similar sentiments following the Oklahoma City bombing.

After 9/11 the president can count on strong discouragement of questioning his policies and actions. When cartoonist Mike Marland drew a picture of an airplane with the caption 'Bush Budget' flying towards twin towers labeled 'Social' and 'Security', there was an outcry from the White House. White House spokesman Ari Fleischer was quoted by Reuters: "Equating the president's budget with a terrorist attack that killed 3,000 people is as wrong as wrong can be. This is not respectful of the families of those who lost their lives." The condemnation resulted in the the submission of the MONITOR's Editor Mike Pride, who initially gave the go ahead for the cartoon, to a public appology for running it.

Many of the questions about 9/11 have lead more courageous journalists and others to equate more than just the president's budget to those events not to mention his respect for the families involved. The evidence and circumstances surrounding those events that are slowly coming to light indicate the strong possiblity that there was at least a standdown in the wake of forknowledge of the attacks. Media Analyst Barrie Zwicker has written a series of articles that raise some of these questions in his series entitled, "The Great Deception":

The emperor's new clothes has assembled a useful guide on the issue as well:

The burning of the Reichstag in Germany on February 27, 1933, was the impetus to invest vast unquestioning powers on then Chancelor Adolf Hitler. The world will never know who was really behind that action but there is evidence nazi security forces were in part to blame. What is clear is that Hitler used these events to manipulate the german people towards submission or blind indifference to his policies that inevitably spelled the doom for his and many other countries. The Oklahoma City bombing and its lone nut explanation was successfully used to give national security forces in the United States unprecedented sway over our civil liberties and silence criticisms regarding the slaughter at the Branch Davidian complex in Waco, Texas. This time the Patriot Act sealed the nails on the coffin of our civil liberties. This time, they are doing the same thing and bringing us into a war as well. A war we cant ultimately win according to former CIA Senior Officer, Bill Christison.