Mint robbers were framed in Australia. 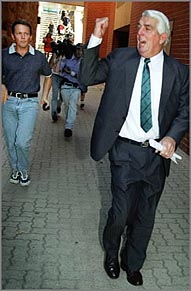 Mint robbers were framed in Australia.

Running for justice ... one of the three Mickelberg brothers, Peter, chases the then CIB chief, Don Hancock, down the street after losing an appeal in the Perth Supreme Court in February 1999. Photo: WA News

A former police officer has admitted that he and another detective lied and faked evidence during the trial of the Mickelberg brothers for the Perth Mint gold swindle 20 years ago.

The West Australian Attorney-General, Jim McGinty, said yesterday that Anthony Lewandowski had given an affidavit to the Director of Public Prosecutions admitting he and the former CIB chief Don Hancock, who was murdered last year, had lied and fabricated evidence to convict the Mickelbergs.

Raymond, Peter and Brian Mickelberg were convicted in 1983 of swindling $650,000 worth of gold from the mint.

Brian Mickelberg had his conviction overturned after nine months in jail. He died in a helicopter crash in 1986.

Raymond and Peter Mickleberg made four unsuccessful attempts to have their convictions overturned - three appeals to the Court of Criminal Appeal, at which Mr Lewandowski and Mr Hancock testified, and an appeal to the High Court.

Mr McGinty said Mr Lewandowski had admitted that he and Mr Hancock had fabricated confessions from the brothers, and had lied at the trial and the appeals.

He had also admitted that Peter Mickelberg was stripped naked and beaten by interviewing officers during the investigation.

Mr Lewandowski had said he had not come forward earlier because he had not wanted to cross Mr Hancock, who died in a car bombing in what police believe was a payback killing by Gypsy Joker bikie gang members after the murder of a gang member in 2000.

Mr McGinty said Mr Lewandowski's belated admission - if it were truthful - would strike at the heart of public confidence in the justice system.

"This is one of the most high-profile police investigations we have seen in Western Australia, and if it was found that convictions were obtained by police fabricating evidence, the ramifications are enormous."

Mr McGinty has referred Mr Lewandowski's affidavit to the royal commission into alleged police corruption, which is due to recommence hearings on July 1.

The robbery on June 22, 1982, was the most audacious ever staged in Perth - an ingenious swindle which saw 49 gold bars spirited out of the impregnable Mint to a mystery hiding place.

Although the evidence against the Mickelbergs was compelling - in particular Ray Mickelberg's fingerprint on one of three fake cheques used to pay for the gold - the brothers insisted from the start that the police had framed them.

They said the detectives, led by Don Hancock, had lied at their trial in the District Court, had fabricated confessions by all three, and had planted the damning fingerprint.

It would have been easy for the police to get hold of a mould of Ray's finger, they said. One of his hobbies was casting hands, in brass, plastic, rubber and perspex.

There were about 20 of the hands in his Marmion Beach home when the police first arrived, and several were taken away for inspection.

In 1989, 55 kilograms of gold pellets, said to have been from the swindle, were found outside a Perth television station, accompanied by a note protesting the Mickelberg brothers' innocence and claiming that a prominent Perth businessman was behind the swindle