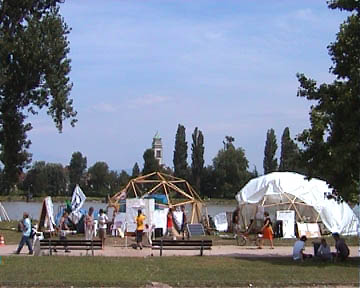 From 19 to July 28 it is held in Strasburg the international European bordercamp. The camping, born through the network noborder and organized by various groups of activists in Europe, consists in 10 days of actions, seminars and discussions around the central matter of the "freedom of movement" for EVERYBODY. The goal of the camp is to gather together activists, migrants and artists from all europe in a kind of laboratory of creative resistance. Strasburg has been chosen not only because of being the capital of the European union, but also because it hosts the general quartier of the Schengen Information Systems [SIS].
The database SIS is a key tool in the construction of "frontiers of regime electronics." It contains masses of personal data, not only for criminal records but mainly of refugees and migrants expelled by the various confinements or filed for being expelled from Europe. From here the project "d.sec" is born, which attempt to mix the cyber-activism with the movements of the road, experimentation zone and sharing in order to understand better the processes of virtualization of the frontiers and to decide whether to answer to this form of Regime. For an aware and critical use of the technologies.
During the whole camping there will be a strong attention to the socialization of own practices, reflections and knowledges, also through team of translators and through a daily paper printout and distributed by the same camping.