Jaguar Motors is using a CLASH song to promote their new line of luxury cars! 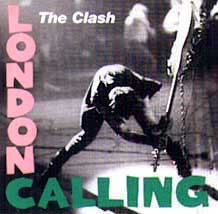 Ford Motor Company's Jaguar North America unit launched a July 2002 summer ad campaign called "London Calling." The ad firm handling the account would not disclose the cost of the campaign targeting "a younger audience." But George Ayres, vice president of marketing for Jaguar, said the 2002 budget "isn't necessarily bigger" than the $66.7 million spent in 2001. In the "London Calling" television advertisement there are images of a quaint London that reinforce a tourist's perception of British heritage... Big Ben, the Parliament Building, etc. The latest model Jaguar moves slowly down cobblestone streets. A pretty young woman is seen in an old style red phone booth as the silver colored Jaguar glides by. The musical backdrop to this facade is none other than the CLASH song, with Joe Strummer's gravely panicked voice wailing the refrain.

For the full story, visit:
www.art-for-a-change.com/News/clash.htm

Mark Vallen - ART FOR A CHANGE