Paul-Emile Dupret, a staff advisor for the European Parliament and citizen of Belguim, was peppered with rubber bullets by municipal police in Caracas, who mistook him for a community TV cameraman. 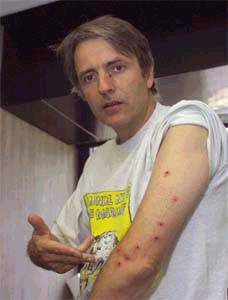 European Parliament advisor and staff member Paul-Emile Dupret was shot with rubber bullets 41 times by the municipal police of Caracas, Venezuela, after apparently being mistaken for a community media cameraman. Dupret was holding a video camera belonging to community television station Catia TV while observing protest activity outside the Supreme Court, where judges were hearing arguments in the case of generals involved in the April 11 coup against Venezuelan president Hugo Chávez, according to this report by Al Giordano, publisher of NarcoNews.com:

The military coup against Chávez, instigated by Venezuela’s oil oligarchs and their oil-dependent friends, lasted three days until hundreds of thousands of Venezuelans took to the streets to demand the return of the popular Chávez. During the coup, commercial media inside Venezuela failed to accurately report events, while the American press falsely represented the coup as a “democratic” overthrow of the “dictator” Chávez. Since the coup failed, police forces loyal to Caracas’ pro-coup Mayor Alfredo Peña have brutally attacked and illegally imprisoned members of the noncommercial media, who helped reverse the coup by reporting the facts to the Venezuelan people. Peña has also threatened to have Catia TV evicted from its headquarters.

This lack of accuracy by the commercial media of Venezuela led the trade union of El Nacional, the country’s largest newspaper, to issue a June 10 statement that:

“It was made abundantly clear from the disastrous image of those days of disinformation, in which the majority of employees, reporters and journalists put our lives on the line only for media owners and board members to decide not to publish anything and hide from the public the serious events that were taking place in the streets, while mainstream TV channels aired old movies as if nothing was happening. No more manipulation. We workers say firmly and responsibly that we will not accept such behavior again.”

The New York-based Committee to Protect Journalists also released a statement that “some journalists charged that editors told them not to cover pro-Chávez events or rewrote copy to put the opposition in a better light.” The same report quoted an unidentified journalist from a leading Venezuelan daily newspaper saying, “If the journalist collects the facts, as they happened, and gives them to the newspaper, the information is then manipulated to make the situation seem different.”

Although the CPJ report goes to great lengths to blame Chávez for taking an aggressive rhetorical stance against the false reporting of the commercial media, and thus encouraging attacks against commercial media workers, the report said that conditions for journalists were no better during the military coup that briefly brought wealthy businessman Pedro Carmona to power. Said the report:

Dupret, a Belgian citizen, temporarily lost the vision in his left eye after one of the rubber bullets missed the eye by millimeters. Said Dupret in a statement:

“I was victim of an aggression by the Caracas police while I accompanied a news team of the community television station Catia TV that covered the demonstrations by Venezuelan citizens both in favor of the military generals implicated in the April 11 coup d'etat, and others opposed to the impunity of that action, in front of the Supreme Court. Suddenly, the metropolitan police of Caracas, in an act of evident provocation, made very rapid maneuvers in which they gratuitously attacked the sector of the demonstrations that was in favor of the (national) government, whom they violently beat and attacked with rubber bullet gunshots.

“It is worth stressing that for almost two years the metropolitan police agents have been trained by United States agents belonging to the Bratton Group (headed by former New York and Boston police commissioner William Bratton). This "security" corps acts under the command of Mayor Alfredo Peña, who is a bitter opponent of the Chávez government and the social reforms that this government has implemented. The metropolitan police played a decisive role so that on April 11th the pro-coup sectors could succeed, until the people and the sectors of the armed forces loyal to the Constitution reacted to reestablish the legitimate government.”

The attack on Dupret is all too typical of the treatment of independent journalists in Venezuela during and since the failed coup. Giordano has sought to raise a public outcry over the treatment of community radio journalist Nicolás Rivera. During the coup, Rivera saw snipers shooting indiscriminately from the rooftops of various buildings, resulting in the death of 18 civilians and the wounding of more than 150 others. These attacks were apparently designed to incite a national panic to be used as a pretence to replace the Chávez government.

Rivera returned to Radio Perola, a noncommercial community radio station, and worked around the clock to report the facts as he had seen them. On April 12, according to Giordano, police loyal to Carmona broke down the door of Radio Perola, handcuffed and blindfolded Rivera and then beat him repeatedly as they dragged him to his home. Giordano interviewed Rivera’s wife Tibisay de Vivera, 25, who described what happened next:

“The police grabbed me by the hair and threw me to the floor. They beat me, while they tortured Nicolás, in front of our children. They said they were going to kill us. They planted a bag of bullets on Nicolás and obligated me to sign a statement they had already written or they would kill our children, two and three years old.”

Rivera’s wife added that “on Sunday, the 14th, when Chávez returned, Nicolás was released. His face was disfigured. He had been tortured. And he had not been fed for two days.”

On June 28, Rivera went to file a complaint against the police who had tortured and beaten him, and terrorized his family. Although he had called ahead and arranged a meeting with the police representative responsible for taking such complaints, Rivera was arrested and charged as being one of the very snipers whose activities he was reporting on Radio Perola when police broke down the door and seized him. A number of these snipers were arrested by forces loyal to Chávez before his removal, only to be later released during Carmona’s temporary stay in power. Rivera remains incarcerated, and press advocacy groups such as the Inter-American Press Association based in Miami, Reporters Without Borders based in Paris (and over 40% funded by the European Parilment) and even the CPJ have been totally silent about the treatment of Rivera and other community journalists in Venezuela.

However, while Venezuela’s independent media is subject to attacks and harassment by pro-coup forces, the commercial media in Venezuela continues to call for Chávez’ ouster. This should come as no surprise, since commercial TV station Venevisión was used as a base of operations by the Carmona military coup. Venevisión is owned by Cuban native and multimillionaire Gustavo Cisneros, a golfing partner of former U.S. President George H.W. Bush, who vacationed in 2001 at Cisneros’ Venezuelan estate. The corrupt relationship between pro-coup forces and the commercial media of Venezuela prompted Le Monde Diplomatique reporter Maurice LeMoine to observe:

“Their investigations, interviews and commentaries all pursue the same objective: to undermine the legitimacy of the government and to destroy the president's popular support.”

LeMoine said that a faked interview with Le Monde director Ignacio Ramonet, in which the director was supposed to have made negative comments about Chávez, was circulated among Venezuelan media outlets and became front page news. None of the media outlets which published the comments sought to contact Ramonet, who denied having made them. LeMoine further observed:

“Never even in Latin American history has the media been so directly involved in a political coup. Venezuela's 'hate media' controls 95% of the airwaves and has a near-monopoly over newsprint, and it played a major part in the failed attempt to overthrow the president, Hugo Chávez, in April. Although tensions in the country could easily spill into civil war, the media is still directly encouraging dissident elements to overthrow the democratically elected president -- if necessary by force.”

The full report by Le Monde Diplomatique can be found here:

To protest the lack of response by media advocacy organizations, please contact:

Although the New York-based Committee to Protect Journalists has responded to the situation in Venezuela by reporting some of the facts, they have yet to denounce the treatment of Rivera and others, or call for his release. Please email

info@cpj.org to encourage them to do so.

[Buddy Grizzard is a contributing writer for the Atlanta Independent Media Center and publisher of Authentic Press, located on the web at www.authenticpress.net. Attached photo is courtesy of NarcoNews.com.]