Isabel Zanutigh and Beatriz Marega of the grassroots housewives’ union Sindicato de Amas de Casa de Santa Fe & the Red Interbarrial de Mujeres are coming to Europe. Women's hard work, resourcefulness and their determination to remain independent of all political parties have been crucial to surviving and winning some financial recognition. 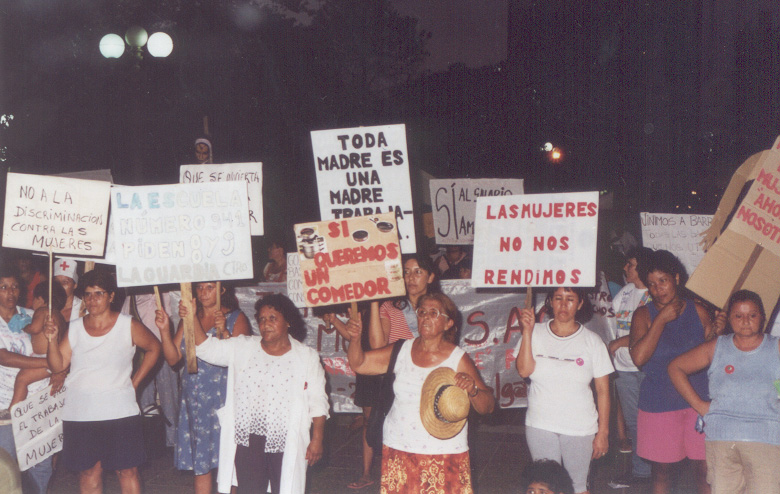 Isabel Zanutigh and Beatriz Marega of the grassroots housewives’ union Sindicato de Amas de Casa de Santa Fe & the Red Interbarrial de Mujeres are coming to Europe. They will be speaking in Bristol on Wednesday 4 Sept 7pm (Easton Community Centre) and London (Conway Hall, Red Lion Square) on Thursday 5 Sept 7pm, and in Barcelona, Spain 10 Sept. Women's hard work, resourcefulness and their determination to remain independent of all political parties have been crucial to surviving and winning some financial recognition.
SAC coordinates the Global Woman's Strike in Argentina.

The “pots and pans uprising” that rocked Argentina on 19-20 December 2001, with hundreds of thousands of people taking to the streets all over the country, was not spontaneous. In the past decade, the corruption of politicians and civil servants, the illegal deals and sale of public utilities, and the systematic destruction of industry, left millions of people out of waged work. Protest movements of unemployed women and men have occupied roads and highways everywhere. What was new about the December nights which brought the government down was the massive presence of women in the street, banging their pots. Since then, mothers with their children, housewives and women pensioners, teachers, employees or small property owners, have had an active presence in every neighbourhood assembly and every mobilization.

The Sindicato des Amas de Casa has enormous credibility because of its many years of grassroots organizing independent of all political parties. Following its call to form women's assemblies, the squares in some of the poorest neighbourhoods of Santa Fe filled with women bringing their urgent needs and demands. It was the first step towards women’s autonomous organising and the formation of the Red Interbarrial de Mujeres RIM (Interneighbourhood Women's Network), where all decisions are taken collectively in the assembly.

Together women have been able to get hold of the monthly emergency payments for heads of household which corrupt politicians previously denied them. Winning this small financial recognition of their caring work has transformed what they thought was possible. With their new independence and collective action, women have succeeded in:
· taking control of the neighbourhood Health Centre for victims of domestic violence
· shopping collectively to get lower prices for food
· running a neighbourhood soup kitchen for more than 200 children
· denouncing State employees who deny subsidies and food parcels to women heads of household who refuse to sleep with them. . .

At the London meeting there will also be a video premiere:
In July the Women's Institute of Venezuela invited the Global Women's Strike to a conference aimed at forming an international support network to prevent further military coups and assassinations against the elected government. Women are working hard to avoid bloodshed and are central to this peaceful constitutional revolution which prioritises the needs of the people (80% of whom live in poverty) over US oil interests. Video interviews with women and President Hugo Chavez's response to the Global Women's Strike and its theme INVEST IN CARING NOT KILLING. Presented by Nina Lopez-Jones.