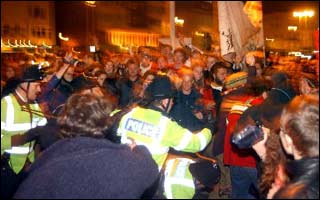 
The national day of action against the war in Iraq started out in Brighton at the University of Brighton where the Grand Parade was occupied. At the town hall there was a peace rally between 12-2 pm and students at the University of Sussex and Brighton University were preparing for a critical mass which was to kick off at 3 pm. Initially about 50(?)students were gathered, chanting slogans like: "Who let the bombs out? Bush, Bush and Blair!".

The police showed up just before the students took to the road, on bikes and on foot, and headed towards Wild park where more students were to join. The police gathered in numbers and started filming and blocking off traffic, and when they temporarily stopped drivers at Coldean lane, to let protesters past, Lewes road was taken.

The police tried in vain to split the critical mass, provoke cyclists by pushing and grabbing them, and control it so that some traffic could be let through. By this time though, the police outnumbered the protestors and therefore they contributed greatly to blocking the traffic. At wild park more students joined, as well as many bystanders.

At about 4 pm, the first arrest was made during a confusing moment when a car ended up hitting a bike, heavily denting the back wheel and the police started pointing out people who they wanted arrested. I was told by a police officer later that the arrest was probably due to "refusal to follow order". A more brutal arrest was made outside Grand Parade University building just before the critical mass reached Old Steine.

At this point the police presence was large and an officer with a very small and weak powered megaphone was telling people to get off the road and gather on the grass around the fountain, which eventually people did. The gathering slowly grew as people held speeches, played drums and sang songs. New protestors arrived, carrying banners and candles and the manifestation quickly grew in size.

At about 6 pm the protestors quickly ran out into the streets and headed down towards the roundabout outside the Brighton pier which was blocked successfully, while startled police were running around trying to control the situation. The police tried in vain to control the crowd using pepper spray and hitting people with batons and performing seemingly random arrests. The arrests were often brutal but only for short periods of time due to a heavy presence of cameras and legal observers. People were chanting "Shame on you! Shame on you!" at the police for their random attacks into the crowds.

Protestors were slowly pushed off towards Marine Parade, where there was a standstill for quite some time. This was broken by a chaotic city walk which started off up Manchester street, stayed for a while at St. James street, headed up George street, down to the pavilion and then hit the North Lanes. Police were having a very hard time keeping up with protestors and were constantly heard giving contradictory orders.

The plan was to end up at Churchill Square but aggressive riot police blocked of demonstrators at Queens road, just above the clock tower, very close to the final destination. The demonstration then led up towards the train station where most people started dropping off.

A few persistent protestors kept walking and led the police down to London road, then back to the pier and took some of the Grand Junction Road. By this time the ratio of police per protestor was ridiculous and many bystanders were wondering what the police were doing.

The road became completely blocked by police vans, dogs and riot police and though a few arrests were made, protestors were peaceful and played drums and danced. The police escort ended up surrounding protestors at Madeira drive, by the sea centre, where protestors were completely surrounded and then let go slowly, one by one. The last protestors were released at about 10:30 pm, ending a bizarre waiting game.

Police provocation was high and protestors very well behaved and disciplined. There was no vandalism of any sort, no attacks towards stores or police and great support from bystanders. The question is: what would have happened if the police presence was kept at a minimum and the police would have been more passive? Probably, not much. The protests were successful, and the police ended up almost blocking as much traffic as protestors. An attempted policy of zero tolerance and symbolic arrests (and maybe a longing for overtime?) could be a possible explanation of police tactics yesterday.

Don’t forget, the day after the attack against Iraq, the people will be on the streets again, 5:30 pm Churchill Square.

WE ARE THE CITY, WE CAN SHUT IT DOWN!

(Watch out for more info, photos, and a short film.)