Onlineprotest N23 against repression in Italy 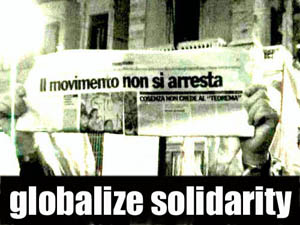 Onlineprotest N23 against repression in Italy

Anti-globalisation activists and critics of the Berlusconi government have been subjected to enormous repression since protests against the G8-summit took place in Genoa in 2001. The killing of Carlo Giuliani, a young demonstrator, and the raid on the Diaz school in Genoa only marked the beginning. A week after the European Social Forum in Florence, ending with a peaceful march of some one million people, 20 assumed "heads" of the Italian anti-globalisation movement were arrested on November 15th, charged with "subversive propaganda" and conspiracy against the state and its economic constitution, based on the accusation that they had founded an organization called "sud ribelle". The arrest warrants issued lack decent evidence and show many inconsistencies. The "conspiracy act", created during the fascist era, however, does not require clear evidence: mere intention will be sufficient as a legal base for a conviction of the globalization critics. In Italy, a wave of outrage has been caused by these court-custodies: left-wing trade union CGIL, the communist party and the democratic left party, in addition to the "no-globals", as they are called in Italy, condemned all arrests, considering them politically motivated. More than 100.000 people took to the streets in protest at the arrests in various Italian cities following last Friday´s events. A nationwide rally will be held on Saturday, November 23rd.

Meanwhile, a loose network of internet activists from different countries has called for a virtual protest on the Italian justice department´s website (www.giustizia.it ) in support of the demonstration in Italy´s streets. Both manifestations are to take place at the same time. "With this symbolic action, we want to express our solidarity with the Italian protest movement and thereby show the Italian courts and authorities that we have put a critical eye on them." an internet activist declares, "it is not about sabotaging the justice department´s website, though with our mass access, we would like to tell the Berlusconi government that we are there, we´re aware and we condemn its actions." The initiative also calls for politely-written protest e-mails directed at diverse Italian government agencies. "The Italian protest movement needs our support, and there is no faster and more internationalised way to show our anger about the events than using the internet. We have to globalise solidarity!" the activist adds.

The internet activists have created an international website for mobilising purposes: there, anyone using a computer and wanting to participate can have a look at how the internet protest works: just access www.giustizia.it from 11 a.m. to 2 p.m. on Saturday and leave international tracks of data by clicking curiously and courageously on the website.