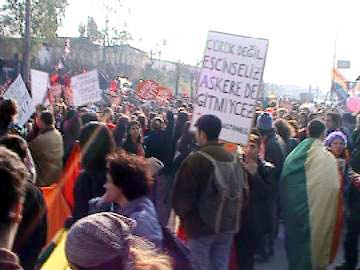 The Meeting has been organised by over 150 organisations in Istanbul and over 30 organisations in Izmir. So many organisations, political parties, trade unions, associations, chambers of professionals, various initiatives besides the members of the pro Islamic organisations have set aside their differences for the first time and have joined ranks to reject a possible attack on Iraq and against any role of the Turkish army in such a war.

The British Labour Party and Stop the War Coalition member, MP Jeremy Corbyn has also attended the meeting, but the police has forbidden him to address the meeting in English. The translation of his speech was read to demonstrators.

The "No War in Iraq" Coordination considers now an even bigger demonstration in January 12, 2003 and has also taken the 15th of February, the joint European anti-war date, in its schedule. The Istanbul Social Forum Initiative is also an active part of the Coordination and the No to War Platform.