URGENT ACTION ALERT!! Instead of protecting prostitute women the police have used their regular ‘security’ visits to harass, searching flats and possessions and pass information to immigration officers. Following the press conference and public enquiry Soho flats were raided 18 February and 8 women were arrested. If anyone can give help and support please contact the English Collective of Prostitutes. 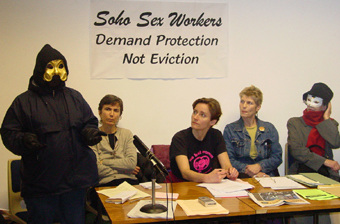 The day a rector spoke in defence of Soho's brothels
By Helen Rumbelow
The Times, February 12, 2003

WOMEN in the sex industry claim to have seen it all, but even they were amazed by the interest in a public inquiry to decide if prostitutes should be evicted from Soho, historically Londons red light district.

A church rector, business leaders and 10,000 signatories to a petition protested against Westminster City Councils crackdown on bordellos, which have been operating in the area for more than 300 years.

Prostitutes and their maids attentively took notes in Pimlico as lawyers put their case to an inspector, who will report to John Prescott, the Deputy Prime Minister.

Sohos residents argued that not only were prostitutes vital to the areas traditions, but that the women and the community would be less safe if they were pushed on to the street.

Clare Herbert, Rector of St Annes Church in Soho, said that her congregation valued the tolerant attitude of the area. They prove no difficulty for us and we are sure women are safer working there than when they are pushed out on to the street or forced to move to different areas of London, she said.

If these women get pushed out it increases the chance that they become workers on the street and therefore become a greater problem to the local community.

Opponents of the council accused it of wanting to profit from the sale of the properties, worth up to £1 million each, to private developers.

But Westminster council said that the women were dragging down Soho, both by their work and the poor repair of their flats.

The council has asked the Government for a compulsory purchase order on ten properties, which house about a third of the prostitutes working in Soho. The inquiry centres on the first property which could be compulsorily purchased. It consists of two flats in an 18th-century house in Peter Street, in the heart of the red light district, where two prostitutes who prefer to be known as Penny and Ms M work legally and pay business rates.

Robert Marshall, the grey-haired inspector, asked to visit Peter Street to see conditions for himself. Jonathan Ferris, representing Westminster City Council, was keen for him to do so as soon as possible.

However, Stephen Cottle, counsel for the landlord, Ainsdale Investments, which is based in the British Virgin Islands, advised the inspector that a surprise visit would not be welcomed. It would be nice to let them know that you are coming, Mr Cottle said. Mr Marshall will visit this morning.

The increasingly acrimonious debate hinged on whether Penny and Ms M could prove that they were legally resident at the property. The inquiry was told, record-keeping was not a strong point of the sex industry. A written statement from one of the women said that she had been sub-let the house by another prostitute, called Elsie, in 1987. The house had been a fish-and-chip shop but had been used by prostitutes since 1959, when Parliament passed the Street Offences Act to clean up Soho by imposing much stricter penalties for street-walking.

Unfortunately neither of the women was on the electoral roll and did not appear at the inquiry to be questioned. Mr Cottle said that this was because the women had no money and could not afford legal representation.

Mr Ferris rejoined: There is no financial reason why the two women could not be here today, unless they were busy elsewhere. Mr Cottle called this remark, disgraceful, a pure smear.

Bryan Burrough, president of the Soho Society, a residents association, said that they had received no complaints about the flat, and the Soho Housing Association said it would be wrong to evict the women.

Later Penny spoke from her flat to say that she was tidying up for the arrival of the inspector. This flat has been my life, home and work for all these years. I dont want the council to take it away for rich property developers.

Trevor Beattie, whose advertising agency TBWA is near by, said: The sex industry in Soho has been there longer than Westminster council. They are targeting vulnerable women to make some money.

The facts on prostitution:

Albanian gangsters control more than 70 per cent of brothels in Soho. By smuggling East European sex slaves into the country, they have undercut local womens rates.

The women charge as little as £30 for sex and are forced to deal with between 20 and 30 clients a day.

Soho prostitution is a business worth about £12 million a year.

Last year police claimed that about 70 flats in Soho were being used as brothels.

Most Albanian gangsters in Britain are men in their 20s from the northern part of their country.

5,000 people live in Soho, which can trace its origins back to the hunting grounds where the cry of the huntsman gave the district its name.

Hear from: women whose loved ones were recently murdered;
women fighting eviction after living & working in Soho, some for 25 years;
the Soho Society; the local Rector & other community support.

Elizabeth Valad, the young mother whose body was so tragically found in bin bags in Camden, North West London a month ago, is one of three women to be murdered in recent years who were forced out of Soho flats by Westminster. One local woman commented:
“Liz was a friend of mine. Before Christmas she was working in Windmill Street and was forced out into King’s Cross. When other women are all driven out, what is going to happen to them? Then they are at the mercy of the traffickers and Jack the rippers. Women look out for each other here. We are proud of the fact that no woman has ever been killed in a Soho flat.”

Soho is one of the longest established red light areas and has traditionally been a safe place for women to work. Sex workers are part of a strong protective community and have support from other residents including the Soho Society, the Rector of the local church and many local businesses. Yet Westminster Council continues to issue Compulsory Purchase Orders (CPO) saying that prostitution is a “blight to the local environment and quality of life for people living, working and visiting in the neighbourhood”. Westminster Council cannot abide that women are working independently and taking care of each other. Prostitute women and their maids are protesting against the CPOs and have forced a public enquiry to be heard on Tuesday 11 February.

Instead of protecting prostitute women the police have used their regular ‘security’ visits to harass, searching flats and possessions and pass information to immigration officers. In February 2001 over 60 flats were raided and only the prompt intervention of the sex worker community and Legal Action for Women prevented immigrant and asylum seeking women being sent back to the war-torn countries they had fled from. Mothers were separated from their children. The raids have continued weekly. They must stop.