Seven peace activists were arrested on Wednesday morning after closing a factory which is refitting the UK's illegal weapons of mass destruction.
OF MASS DESTRUCTION (article 1) 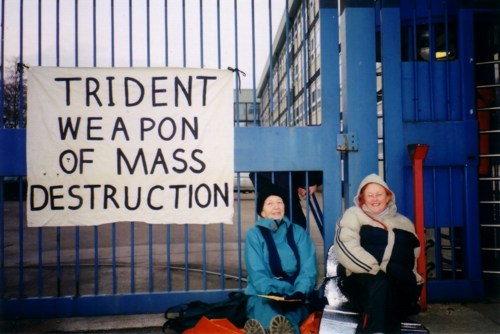 Seven Midlands peace campaigners were arrested this morning after successfully closing the Rolls Royce site at Derby for 1 hour. The activists from Trident Ploughshares, the direct action campaign to peacefully disarm the British Trident nuclear weapons system, closed the Raynesway site just before 7am. They locked themselves to the entrance gates with a variety of chains, padlocks and thumb locks, closing the factory just as employees were arriving for work. A traffic jam ensued and some employees were sent away.
All 7 were charged with breach of the peace, taken to St Mary's Wharf police station in Derby and later released without charge.

The plant produces nuclear fuel components for the Trident submarines, which are powered by nuclear reactors. One of the 4 submarines, HMS Vanguard, is
currently in Devonport docks, Plymouth, undergoing a re-fit, and new fuel plates will be transported by road from Derby to Plymouth as part of this process.

The group attached a banner to the gates, proclaiming:
"Rolls Royce: the driving force behind Britain's nuclear weapons", and gave out leaflets to employees arriving at the site, explaining their presence.

A spokesperson said, "By closing the factory, we are delaying the production and transportation of the fuel components which are essential to the powering of the submarines carrying Britain's nuclear weapons. We are also highlighting the hypocrisy of the Government, which is expounding the dangers of these weapons and at the same time threatening the world with its
own weapons of mass destruction." Those arrested were Marlene Yeo and Zina Zelter of Loughborough, Jennifer Pardue of Stone and Nigel Hill of Stafford,
Paul Milling and Brenda Burrell of Birmingham, and Sarah Lasenby of Oxford.

Notes for journalists
Trident Ploughshares was established in 1998 to challenge the UK's illegal and immoral possession and threatened use of nuclear weapons. Trident
Ploughshares activists pledge to dismantle the UK's nuclear arsenal in a peaceful, non-violent, open and accountable manner. As at 22/1/3 there have
been 1,803 arrests, 398 trials, 1,711 days spent in prison and £56,490.50 of fines and compensation orders. The UK's Trident nuclear weapons system is
based on 4 submarines each carrying 12 to16 missiles, each of which can deliver a number of 100 kiloton warheads to individual targets - mass
destruction on an unimaginable level.