Am I paranoid or are the US and UK PIGs just love killing babies and children? The suffering inflicted by the million rounds of depleted Uranuim does not satisfy the PIGs I suppose (see uploaded picture) 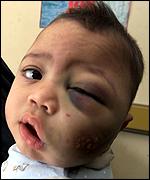 (Watchout the source is all three lines put together the story is still developing I believe...)

One of hundreds of child victims in the 15-day-old U.S.-led war in Iraq, she lost one eye and her face and body are peppered with wounds from what must have been a storm of shrapnel.

"Mummy! I want my mummy. Where is my mummy?" Aisha kept muttering. Yet neither the nurse nor the neighbor trying to comfort her dared to answer.

Her four-year-old brother Mohammad died and her mother and other brother were in critical condition undergoing surgery for head and chest injuries. Her father and two sisters were all badly injured and in another hospital.

A neighbor said he saw missiles crash into Radwaniyeh, a remote area near Baghdad's airport on Wednesday morning.

To their misfortune, they live in an area that -- apart from their farm -- has a presidential palace complex and military positions. A total of 12 children and six adults were struck.

U.S. war headquarters in Qatar said that a farm at Radwaniyeh doubled as a military "command and control facility." Washington says it seeks to minimize civilian casualties in its war to oust President Saddam Hussein.

Aisha was with her cousin and neighbors playing in the garden during a lull in the fighting when a missile struck, the neighbor said.

"We heard the planes and then the big explosion. We saw these houses in flames, and ran to rescue them and get them out from under the rubble. We did not expect them to hit civilians during a lull," the neighbor said.

Aisha lay with dry blood on her clothes and her moans turned to screams when nurses tried to lift her to the operating theater for head surgery.

Doctor Ahmed Abdel Amir said children were bound to make up a large number of casualties because they are such a big proportion of Iraq's 26 million population.

Another child, Mohammad Kazem, seven, lay in the next bed with serum tubes strapped to him. He was hit by shrapnel in the stomach when a missile crashed near his home west of Baghdad.

"He is so terrified now. He trembles when he hears explosions. I keep on trying to calm him down. I keep telling him that nothing will happen to him any more.

"Whenever he hears the thud of explosions he grabs me. I stay hugging him and patting him until the bombings stop," said his mother, Madiha Mohsen Ali, 40.

"He does not sleep or eat. The only question he keeps asking is: 'mummy when will this banging stop?" she added.

Such scenes have become part of daily life in Iraq since the U.S.-led war started with a fierce air attack and a ground invasion on March 20.

Since then, U.S. planes have flown thousands of sorties, destroying Iraq's military buildings, infrastructure and ministries and sometimes civilian homes.

Most said the war, in which Iraq said 1,250 civilians were killed and 5,000 wounded, was particularly hard on children.

Mohammad al-Jammal, six, was also screaming from his wounds. He too had been standing outside his house when a missile struck, killing two people and sending shrapnel into his stomach, opening it to the intestines.

He lay with his father and mother reading Koranic prayers for him. They said he would be all right because "God is looking after him."

Mothers at the hospital compare notes on their children's traumas. Many speak of their terrified children crying relentlessly, trembling when they hear the bombings. They say their children refuse to eat or sleep.

They say their children are bewildered and depressed. There is little for them to do to get through the day and many fear the night when the bombardment normally resumes.

More porcine insults from Ram - we're getting rather bored with your style ram - if you can't stop calling everyone PIGS rather than post sensible news and comment, it would be better if you just refrained from posting.

anything else to mention

anything else to write Rikki?
Do you just like styles and words?

Sorry again. I got caried over.

But please could you also be a bit understanding about the seriousness of the issue here.

These people who conduct these killings live amongst us.
It is no point blaming the US or Israel.

It is the British ..... who we can hold accountable for this and it is the right realistic thing to do.

greetings to my u.k. brothers and sisters from here in the belly of the beast!
please don't insult useful and productive animals like pigs by comparing them to the rich bastard masters of the u.s. and britain!
the rulers of the u.s. and britain are brutal monsters, vampires who are trying to suck the life blood of the world's people.
they are child murderers.
they are rapists.
they are embarking on a course that is ultimately far worse than anything that the nazis ever did.
even adolph hitler thought he needed a pretext to attack Poland, and concocted a phony attack on a german language radio station in poland by "Polish army" soldiers that were actually German prisoners and military in stolen Polish uniforms (read about it in the book Rise and Fall of the Third Reich).
Bush's Fourth Reich blatantly announces the doctrine that they can just invade countries and overthrow their governments when he doesn't like their policies or personnel, or when they dare to try to have weapons to defend themselves!
The U.S. has over 10,000 nuclear warheads! a dagger aimed at the heart of the world's people.
They complain about OTHERS having "weapons of mass destruction" ! what hypocrits.

PLEASE English brothers and sisters, boycott U.S. goods and products. Help us out. Make the U.S. companies international pariahs! You have a history of solidarity with U.S. working people, such as during the U.S. civil war. together our peoples fought the Nazis. progressive people in the U.S. plead with you---keep up the anti-war movement and target U.S. goods and products for boycott! Tell stores you WON'T SHOP THERE if they carry such products. Help bring down the U.S. economy. Help us free ourselves from tyranny! Together, we and the people of the world will win, and ultimately have a world of peace and justice. No more coca-cola. no more mcdonalds. no more GM. No more u.s. troops threatening the peace and stability of the world, murdering children, bombing maternity hospitals, denying water to the people of Baghdad.
Forward this message everywhere in the world to everyone!
What if tomorrow, millions of people stopped buying their crap? PLEASE HELP US!
My own family was victims of the Nazis in Germany and Poland during world war II and we found shelter in England. Just as you fought the common nazi oppressors then, please oppose and expose the u.s. fascists today.
This is no exaggeration or hyperbole.
they are rounding up muslims and arabs here in the U.S. and detaining them without charges, without access to lawyers, even without releasing the names of those they imprison. they are spying on libraries and bookstores to see what people are reading, and spying on people's internet use.
they plan further wars against Iran, Syria, North Korea, the Phillipines and numerous other countries. They must be stopped. Together, we can stop them. UNITED WE ARE INVINCIBLE!
Thank you for listening.
and please, please please, everywhere burn the fucking u.s. flag--but not before covering it with shit and vomit.