A banner was lost or stolen at Monday's Hillsborough demo. If anyone knows where it is please give its owner a call at 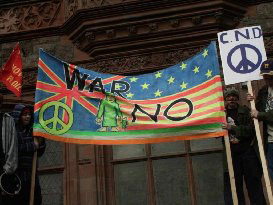 At Monday's Hillsborough protest, US Korean War Vet Mike and a lady whose name I don't know took charge of the banner which shows an Afghan girl against the backdrop of a UK and USA banner with Rep. of Ireland flag below. The banner says "WAR NO". They went close to the police lines and the lady went off leaving Mike with the banner. Mike left he banner leaning against a hedge some 50 yards from the police line and went into the crowd to explore. He came back some fifteen or so minutes later to find the banner gone.