Mayday protestors in Wrexham urged passing motorists to boycott McDonalds with a banner hang. Background about the protest explaining McDonald's links with U.S. Imperialism and other issues was sent to the local press. The banner will be used for future anti-McDonalds actions. 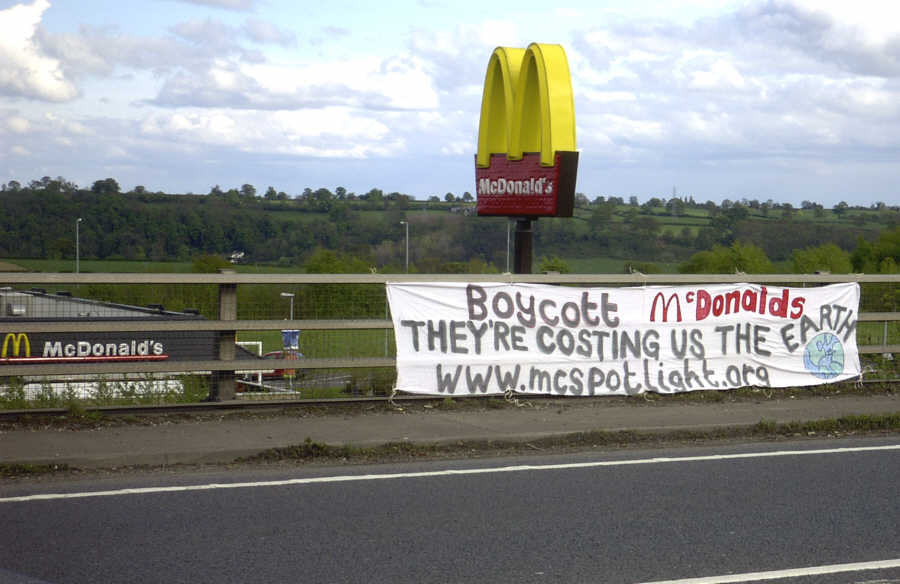 Wrexham Mayday protestors who were unable to attend anti-capitalist events in major cities, today held their own protest at McDonalds in Chirk, encouraging motorists to boycott the global chain of fast food outlets. The group attached a large banner (photos) to the fence along the A483, where it was seen by thousands of motorists, many of whom beeped their car horns or waved in support.

Group spokespeople, Jemima and Rosie, said "We decided to organise our own protest in our local area rather than travel miles to a larger event. McDonalds is a legitimate target for a Mayday protest for several reasons. The company is a net destroyer of jobs because workers are paid very low wages, and the existence of McDonalds puts other, smaller and independent, food outlets out of business. The food is not healthy being mainly high fat and low fibre - we worry that many kids have a McDonalds meal several times a week in place of a proper meal - and the throwaway wrappers and cups are an environmental disaster. In Europe alone, McDonalds use half a million chickens every week from windowless factory farms, and there is ongoing destruction of rainforests as McDonalds clears trees to graze cattle, moving on to cut down more trees once the land loses its fertility.

"Most importantly, perhaps, McDonalds is a potent symbol of U.S. Imperialism. The U.S. are currently occupying Iraq having fought an illegal war with illegal weapons and with a very unfair advantage. They allowed Iraq's cultural heritage to be looted and now they are trying to destroy Iraqi culture still further by turning Iraq into a Christian country. This is nothing short of Fascism. Multinational corporations like McDonalds, which set up all over the world, riding roughshod over local culture and customs, are complicit in the American thrust towards global domination and they deserve to be targeted. It is said that the McDonalds' "golden arches" symbol is more widely recognised worldwide than the Christian cross."