news from the anarchists in Thesaloniki

The anarchist demo gets into riots after 15 minutes.

translation of an article on IMC Germany: 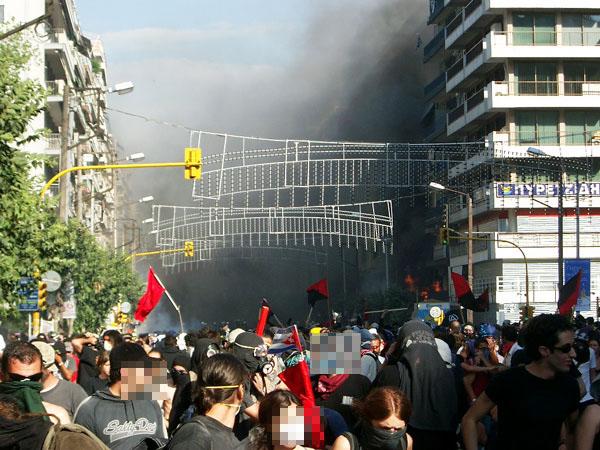 18:15 The anarchist demonstration left with about 3000 people together the university.
At the first crossroads commercial cameramen on the roofs were driven away
with flares as well as everybody else who was around on the street.

Directly in front of the main building of the communist party of Greece, the demonstration came to a halt, because it was agreed not to meet the other demonstrations, whilst the entry of the KKE was devastated.
The as police was present as riotcops, but intervened only with teargas when the first banc was attacked. The demonstrators spread partly out into the side streets, where bancs and jewelry stores were also attacked, small shops were spared but there was also fire laid without consideration that people are living in these houses, and there were repeatedly unaimed stones thrown out of the middle of the demo.

The police used tear gas massively, but only attacks small groups targeting them with batons.
The police attacks the philosophical part of the university, which is defended with molotov cocktails, tear gas fog is masking the view, up to now there are 30 arrests.

The police erects street barricades every 20m on the main road.