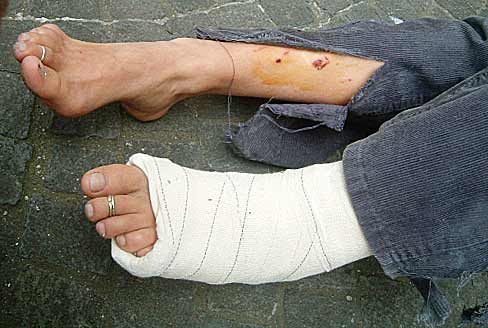 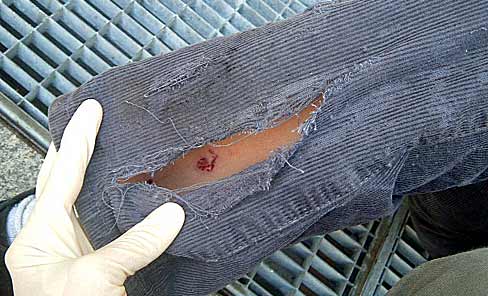 2.) Geneva 31.5./1.6.03 severe head injury
In the night Saturday 31.5.03 / Sunday 1.6.03 before the cultural center Usine a person heavily wounded at the parting by a concussion grenade had to be brought to hosptal by ambulance. The person was soaked with blood, felt heavily dizzy, had problems staying conscious and wasbleeding more and more until beiing driven to hospital.

Beacause of the wound beiing situated on the head, it has to be assumed the "concussion grenade" not being rolled on the floor (as standard operation procedures would demand), but being directly and deliberatly thrown at the person. Depending the distance at the moment of detonation, there's severe danger of long-term damages of the brain, the eyes and the ears. This case could easily have ended with the victim's death!


3.) Lausanne 1.6.03 burst vein, 2. degree burnings etc.
This person beacame a "concussion grenade" thrown after by policemen from a distance of 5-6 meters at about 10 o'clock in the morning. The grenade landed between her feet, where it exploded near the left ankle.

The wounded person heard a "extremely loud bang" and felt "being hit ahainst the feet hard". Her trousers got tattered by the force of the explosion (see pic 2). Below she suffered of laceration and 2nd degree burns (on the pics only starting to develop).

The person felt strong pain and was brought to the emergency dept. of the hospital, where the doctors diagnosed a burst internal vein and a torn ankle at the left foot and 2nd degree burns on both legs. Because of the congestion of blood below the skin she can't walk for 2 months. The foot was put in plaster (see pic 1).

In Lausanne, there were plicemen from Bern and of the French speaking part of Switzerland. Here too it is assured by multiple witness reports that -- similar to the case of Guy Smallman (see

http://www.ssi-media.com/pigbrother/Report2003Part2.htm#8 ) -- they threw the greandes directly after fleeing people.

The hurt person doesn't know yet, if her health insurance will cover the costs, and is evaluating a plaint against the police.

Source: Reports by the victim to PigBrother


4.) Lausanne 1.6.03 lacerations, burns on calf
Burn wounds at the calf similar to pics above (but wizhout the burst vein). Brandverletzungen an der Wade wie bei den Fotos oben (jedoch ohne geplatzte Vene). This person too was beeing thrown at deliberately for the "crime" of pausing with her bicycle near a police vehicle. The person was thown from her feet by the force of the explosion and afterwards also complained about ongoing tinnus (ringing in the ears, according to swiss accident insurance a clear sign for hearing damages to come).


5.) Lausanne 1.6.03 lacerations, burns on arm
Person hurt by "concussion grenade", suffering of lacerations and burns on lower arm. Here too it has to be assumed that the grenade was thrown directly instead according to regulations. Beacause of the wounds beeing situated at the arm, there could easily have been much more and more grave damage.


>>> In Geneva 1.6.03, more journalists were attacked by grenades thrown directly at them and escaped only by chance. At the moment we know of at least 5 mostly independant journalists beeing partly gravely wounded!


--> Many witness reports prove, that in Geneva and Lausanne against al rules & regulations individual policemen made fun of throwing grenades deliberatly & directly at people -- with the known results. It's almost a wonder, that there were "only" severe body injuries and no dead to be mourned!

PigBrother demands the instant dismissal of any policemen who threw grenades directly & deliberately at people!!!