At 13.50pm this afternoon, 7 members of the International Solidarity Movement from Brighton and Birmingham staged a protest at the Caterpillar/Finning(UK) stand at the Hillhead 2003 "quarrying and recycling" trade fair, near Buxton, Derbyshire. 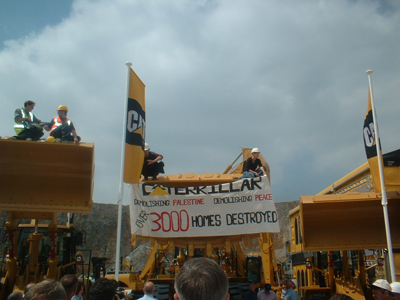 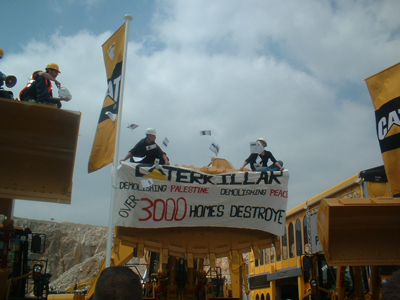 At 13.50pm this afternoon, 7 members of the International Solidarity Movement from Brighton and Birmingham staged a protest at the Caterpillar/Finning(UK) stand at the Hillhead 2003 "quarrying and recycling" trade fair, near Buxton, Derbyshire.

Four of the protesters climbed onto the scoops of two Caterpillar bulldozers displayed outside the stand and unfurled a banner, reading:

Using a megaphone, they explained to those attending the conference that Caterpillar are responsible for manufacturing the D9 military bulldozer, the weapon of choice of the Israeli army, used for demolishing thousands of homes and making tens of thousands of Palestinians homeless. The bulldozers are now also being used in building the 'Apartheid Wall' which is splitting the West Bank into disconnected bantustans, cutting thousands of Palestinians off from their land and families, and destroying any hope of a viable Palestinian state, as called for by the international community.

On March 16th, an American peace activist, Rachel Corrie, was crushed to death by a Caterpillar D9 bulldozer as she and 7 others were attempting to prevent the demolition of the home of a pharmacist in Rafah, near the border with Egypt. One of the protesters at the Trade Fair today, Richard of Brighton, was with Rachel in Rafah when she was killed.

Two of the protesters were quickly escorted off the site after handing out leaflets to bystanders, but the four remained on the bulldozer scoops whilst the seventh remained unchallenged as he filmed events.

At around 15:45 the police arrived in a cherrypicker to negotiate. The protesters refused to talk until another cherrypicker, one not manufactured by Caterpillar, was found. They eventually agreed to come down if they were allowed some time to distribute their remaining leaflets before leaving the site. The police agreed and they climbed down and handed leaflets to customers in the Caterpillar/Finning(UK) hospitality tent.

They rejoined their colleagues outside the fair at around 17:30, with the cameraman catching up with them shortly afterwards.