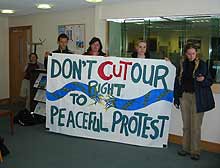 
This morning at 10:00am, demonstrators occupied the Swiss consulate in Portland Tower, central Manchester. They were protesting against the heavy handed tactics and brutality used by Swiss police forces at the G8 summit held last weekend in Evian.

Protestors occupied the consulate, hung a banner reading: "don't cut our right to peaceful protest" and locked on to a hat stand. The protesters negotiated with the consul and stated their demands. A letter condemning the actions of the police was handed in, and in return the consul gave an official letter confirming the demands.
Also whilst in the consulate demonstrators received a response from the Swiss Government stating that an official investigation is taking place and the findings of which will be published on the Cantonal Police of Vaud Website:
www.dse.vd.ch

Also contact between Manchester consulate and London Embassy was made and official assurances where given that the matter would be pushed when forwarded to the Foreign Office.

Martin Shaw and Guy Smallman are currently in hospital in Switzerland. They are facing massive hospital bills due to their injuries. The protestors demanded that all medical costs are fully covered by the Swiss government and that Martin Shaw and Guy Smallman are fully compensated.
The consul explained that due to a recent agreement between Switzerland and the UK, the British government should cover the hospital bill.
It is not yet clear if the bills have to be paid in advance by the individuals and then reclaimed.

The protestors also demanded that the Swiss government condemns the actions of the security forces on this occasion and recognises that the democratic right to protest against unaccountable global institutions is being denied by serious police repression.