Martin Shaw, who has been injured during a non violent direct action at the Anti-G8 Protests in Lausanne, near Evian, has been released from hospital.
In a press conference, new video material was presented, which demonstrated the neglicence of the police at the scene. 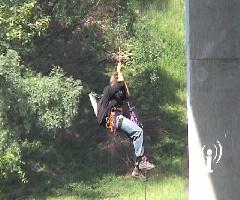 Mr. Deiss was cutting the rope across a motorway bridge upon which two activists were suspended,after talking to the senior police officer on the scene. Cutting the rope resulted in one person, Martin Shaw, falling over 20 metres into a shallow stream, sustaining severe injuries.The fall of the other climber could be stopped by activists holding on to the rope.
Solidarity actions took place and Financial Calls [1|2] for people arrested and injured during the Evian G8 Protests was sent out.

More information:
- Website of the Solidarity group
- pictures of the release from hospital and the press conference, IMC Switzerland
- Real Media Video