After two days of Bulldozer blues the police encircle the house.

Casa encantada. is in Galizia.
it is a CSO. an autonomous centre, an info shop, a squat to be proud of.
the Galizians are thus proud of it.
Galizia is the bit of the Iberian Peninsula which is above Portugal. Where Franco was born and his henchman Fraga still rules. Where the Prestige sank and Nunca Mais began. 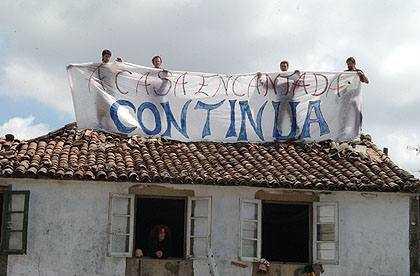 
OK this summer has not been good for the CSO (Occupied social centres) of "Spain".
this week a bulldozer turned up at Casa Encantada and took off half the facade of the building. Bad news. The Okupes rallied and the bulldozer was held at bay. The situation has been continuing to be tense and now the police are encircling the building.

for those who like to read local newspapers in foreign tongues in online versions:
todays report:

http://www.lavozdegalicia.es/ed_santiago/noticia.jsp?CAT=123&TEXTO=1861200
and the day the bulldozer came:

for those who can do the telephone thing:

Xosé Sánchez Bugallo: 981 542 342
*Ramón Lueje: 981 543 165
add an 00-34
remember to say "casa encantada is a popular expression of contemporary culture and is famed throughout the world as being somewhere Galizians could meet and explore new avenues of escape and generally be pleasant and nice, and bulldozers really aren't the way to go" or something more apt.

the previous general media evictions of this summer:

These are not "squat squats" these are places to be very proud of not just in Galizia, Catalúnya, España, but throughout Europe. THroughout the 7 million community who live in and share occupied social space.
see also:
Encantada
See also: