Emergency in the Narmada valley 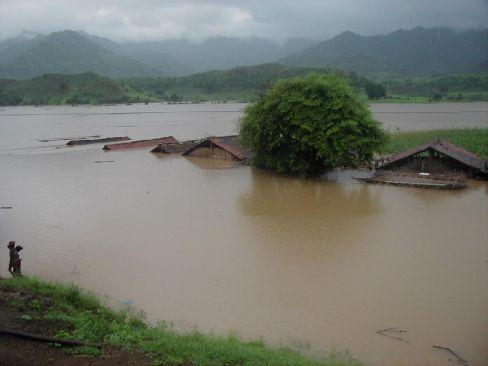 The waters of the River Narmada in western India have risen more than 100m, flooding adivasi (indigenous people) villages in the states of Maharashtra and Madhya Pradesh. A grim situation awaits more than 1500 families in Maharashtra and 12000 families in Madhya Pradesh, who face submergence this monsoon due to the raise in the height of the Sardar Sarovar dam to 100m in May of this year. Once again, the state governments have violated their pledges to ensure fair and complete rehabilitation of the dam- affected people. The Sardar Sarovar dam, initially funded by the World Bank, which later withdrew following the recommendations of its own Morse committee due to large scale irregularities, will displace more than 300,000 people when completed to its full height of 138 metres. In the past monsoons, the people of the Narmada valley and activists of Save the Narmada movement (Narmada Bachao Andolan) led by Medha Patkar have refused to move despite water levels rising up to their necks, as a non-violent protest against lack of rehabilitation and government apathy.

On July 27th, the Maharashtra government sent a police force to Chimalkhedi, one of the villages marooned into an island due to submergence. The police force destroyed homes, let cattle loose and forcibly evicted the villagers and moved them to tin sheds, arresting 74 people including women, children and activists. This comes only weeks after the Maharashtra government, after a eight- day long hunger strike by Medha Patkar and a sit-in in Nagpur by the dam-affected people, agreed in principle to the demands for just rehabilitation.

The government of Madhya Pradesh, where 12000 families face submergence at 100 m dam height, is yet to take any concrete steps although they have agreed to work with village level bodies on land-for-land rehabilitation after increased pressure from prominent social activists. The lack of concern and adequate planning by the proponents of the dam was further exposed by a minor earthquake, measuring 4.3 on the Richter scale, that shook the area on July 26th 2003.

The monsoons have struck earlier this year and so far the submergence has been mainly due to the release of waters from the upstream Tawa dam. The impact of the illegal raise of the dam height to 100m is yet to be seen. Last year in May, the dam height was increased from 90 to 95 metres without rehabilitation of the affected people. The submergence that ensued in the monsoon months of July, August and September 2002 swept away houses and fields and put thousands of indigenous families in danger. The Maharashtra state Government admitted to submergence without rehabilitation and agreed for a Rs 3.5 million compensation for the immediate short-term crop loss and damage. The families are still in the valley awaiting their rightful land-for land rehabilitation.
The Association for India's Development, Friends of River Narmada, and the International Rivers Network strongly urge the state governments, especially those of Maharashtra and Madhya Pradesh, to keep their promises and ensure complete rehabilitation of all dam-affected people at 100m and below. We also severely condemn the use of police brutality and arrests of indigenous peoples and activists.

Background
Earlier this year in May, the Narmada Control Authority (NCA) authorized an increase in height of the Sardar Sarovar dam across the river Narmada from 95 m to 100 m, in flagrant violation of international laws and norms. This was in the face of abundant evidence that the most basic requirements of fair and just resettlement and rehabilitation of affected people had not occurred even at the 95m level - as evidenced by both state sponsored studies such as the Justice Daud Committee report* and the Joint-Task Force commissioned by Maharashtra; and those by independent and respected international groups such as the Housing and Land Rights Network of Habitat International Coalition. The task force in October 2002 found that more than 3600 families remained to be resettled at the 95m level.
As per the Indian Supreme Court judgment of October 2000 and the Narmada Tribunal awards, land-for-land resettlement must precede submergence by at least six months. Furthermore, an overwhelming number of project-affected persons are indigenous peoples (adivasi) and given serious irregularities in the resettlement and rehabilitation, this would be flagrant violation of their rights protected under the Indian Constitution and international conventions.