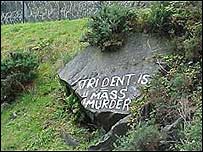 The area has been a focus for protests

Record numbers of anti-nuclear demonstrators are expected at this year's International Disarmament Camp at Coulport on the Clyde.
Organisers Trident Ploughshares said a large number of people had decided to come because it was their first chance to protest since the war in Iraq.

Many of the protesters have come from Europe to demonstrate against what they describe as "Britain's weapons of mass destruction".

The organisers said they were planning actions designed to disrupt the work of the naval bases at Coulport and Faslane, home of the UK's nuclear submarine fleet.

This is the fifth year there has been a two-week long camp in the area.

Last year 55 people were arrested when activists managed to daub paint on a Trident submarine and blockaded the gates of both bases.

Demonstrations are also planned in support of Ulla Roder, the Danish woman who is still in Cornton Vale Prison after disabling a Tornado at RAF Leuchars before the conflict in the Gulf.

Strathclyde Police would not comment on their operational plans but said they were well prepared for the arrival of the protesters.