US forces used napalm in Iraq, then lied about it

Despite previous denials from the Pentagon, the US military are now admitting that napalm, or a very similar chemical weapon, was used by their forces during the recent invasion of Iraq, despite a United Nations convention banning its use.

Now reports are coming from members of Red Cross International who have broken the prohibition of speaking out about what they see in the USA-run detention camp of Gulag – Camp Cropper, on the outskirts of Baghdad International Airport. They have told Amnesty International about the shocking conditions in which 3000 Iraqi prisoners, most of whom have not even been charged, are held.

It is now estimated the hill was hit so badly by missiles, artillery and by the Air Force, that they shaved a couple of feet off it. And anything that was up there that was left after all the explosions was then hit with napalm. And that pretty much put an end to any Iraqi operations up on that hill.

This statement had been checked and acknowledged by the Pentagon. When some of the alternative media picked up the fact that napalm had been used which was only casually mentioned in the above report, the Pentagon was quick to deny having used napalm in the Iraq invasion in an article in the New York Times, and in other reports, such as this one from The Age in Australia. In fact, US Navy sources denied even possessing any Napalm after the last canister was destroyed in April 2001.

However, quoted today in the Sydney Morning Herald, Colonel Mike Daily of the US Marine Corps said:

I can confirm that Mark-77 firebombs were used in that general area.

While there may be technical differences between the Napalm-B used in the Vietnam war and the chemical in the Mark-77, the effects are very similar. Both consist of inflammable fuel thickened into a gel; the main difference is simply the thickening agent used.

The German TV program Monitor got a different response when they inquired about the use of napalm on Iraqis. In the report, you can hear one US soldier say:

The use of napalm was banned by a United Nations convention in 1980 although, as with many such international agreements, the US refused to sign.

I think that's my favourite quote on the subject

All I can say is I am shoked, although i shouldent be realy what should we realy expect from Bush.

The American military is being strictly correct. The current formula differs from that used to produce napalm. A different petroleum product is used.

Dear Chuck, so what? That is the sort of slippery, empty info used by the governing gangs to sidetrack opponents. Don't play their game!

what did you expect?

as an american, may i state the obviouse? the american government lies. its what they do for a living. the entire political system in america is centered around secrecy. if the american people ever heard about even 10% of the things our government has done, there would be an immediate revolution. as long as it is only the intelectuals who know the truth, they can dismiss us as left wing nutcases and call it conspiracy theory. there are currently thousands of americans being held incommunicado, and no one cares because they are muslims. our freedoms are taken away on a daily basis, the cia assasinates political activists (especially native americans) all the time. im not entirely positive that the bush regime didnt plan 9/11 in the first place (much like the reichstag fire benefited hitler, 9/11 benefitted the RIGHT wing psychos in this country)
although i really dont want to believe that is true, it is very likely. why should you be surprised that we are using napalm? im not surprised that we used cluster bombs either, or that we are the only civilized nation to still use land mines. we would use nerve gas too if we could get away with it. im surprised we didnt actually, we could have just blamed it on saddam, and then the lies about the fact that there were no chemical weapons wouldnt have come out (well, there were chemical weapons in iraq, we sold them to them to use on iran, and the kurds, but hell, they used those up, they dont have a long shelf life...)
might i also point out, that by allying yourselves with us, you are guilty by association of all of our war crimes... tony blair had just as much of a hard on for saddam as bush does... watch that man, he is not to be trusted. suspiciouse suicides are the tools of all fascist regimes (many of the bush family enemies have died in mysteriouse plane crashes, and suspiciouse suicides over the years, including prescot bush's Nazi buisiness partners. you can go to a site called

http://www.bk2k.com/bushbodycount/index.shtml/index.shtml for more history on the deaths of bush's enemies over the years)
dont act like america is the entire problem, the problem is right wing organizations and governments around the world, from isreal, the america, to the UK they have all been hijacked by thes backwards wackos. the force of conservatism is the strongest force of evil in the world. the entire right wing idealogy is based on reversing progress, back to simpler times (simpler mainly for rich white men, much more difficult for everyone else) if we let them succeed, in 50 years, women will have lost the right to vote, non whites and non christians will be segregated, birth controll, abortion, homosexuality, will all be outlawed, and we will all be monitored 24 hours a day, that is the corporate right wing agenda. believe it, if you dont there is no way to stop them. do you really want to go back to feudalsim? that is where this corporate right wing takeover is headed, corporate feudalism. many people have died to win the freedoms we have here in the west, now we willingly give them up for the illusion of safety. the problem is that many of our children and their children will have to die fighting just to get back to where we were 3 years ago. when bush was appointed in the coup of 2000, my mom said something that stuck with me "this country wont even be recognizable in 4 years" and she was right its only been 3 and its already been set back 30 years, if bush isnt stopped, in another 4 years the world will not be a good place to live
www.geocities.com/justinrmccormack 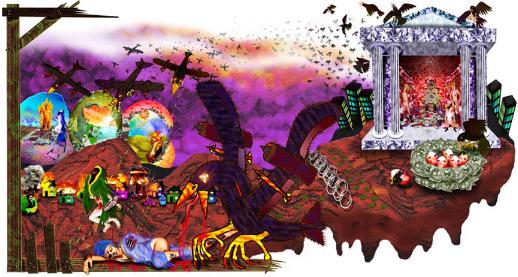 oops, for some reason the picture didnt upload, and my website link didnt work, so heres another try

war on terrorism? did he even consider the terror felt by the iraqis who burned to death? i doubt it... Bush is just another word for c*nt!

what's behind the US dream?

It seems that is what is behind the American dream is repression and crulity. Everyone has to toe the line or else.

But its getting worse - Invasion of British Grenda, and the loss of Visa rights to visiting UK citizens, replaced by visa wavers. We are better off with EU, than toeing and killing for the US.

Such a shame because we share invaded with Iraq, and self impossed oppression with US citizens. How did we let this happen?

If you're interested, here is the background about the United States and the "treaty" about napalm. LINK. The actual treaty is here, I believe. The United States signed the original CCW on April 8, 1982. It entered into force on December 2, 1983. In March 1995, the U.S. Senate ratified Protocols I and II. At the time, Protocol III was not transmitted to the Senate and was instead given further study owing to certain military concerns which have since been addressed. In January 1997, the President submitted to Congress the amended Protocol II, along with Protocols III and IV, for ratification. It was not ratified. Here is a list of which nations have ratified the treaty.

A careful read of the protocols seems to suggest that naplam was banned for use against civilian targets and against military targets close to civilians. There was no ban against the use of napalm against exclusively military targets.