Saturday the 17th August, 2003 – Balata Refugee Camp, Nablus.
The IOF arrive at the home of the Abu Salem family with the intention of demolition. An act of collective punishment for the actions of his son who is a martyr. There are five activists from the International Solidarity Movement staying in the home in response to a very real threat of demolition, due to the IOF carrying out three home demolitions in the Nablus in the previous four days. 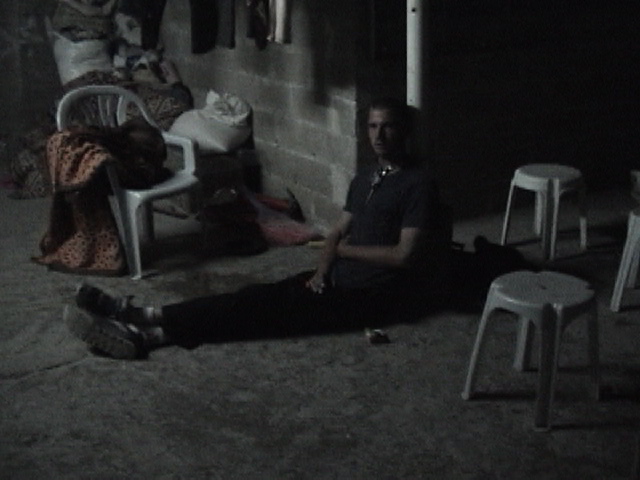 Waiting for the IOF 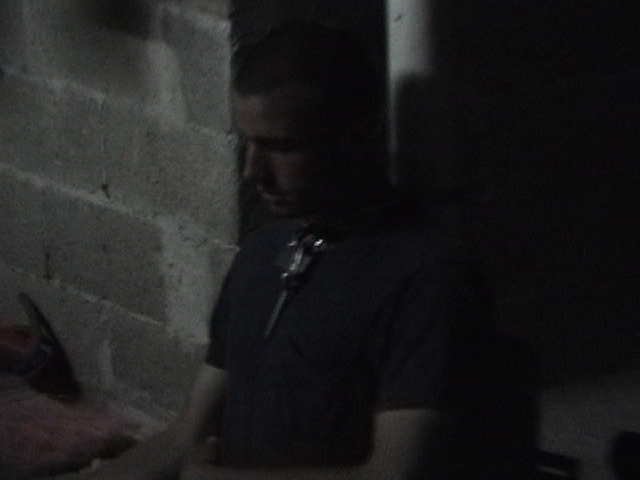 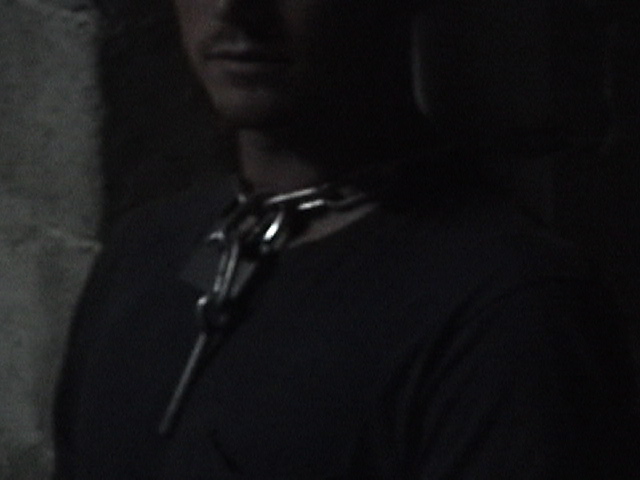 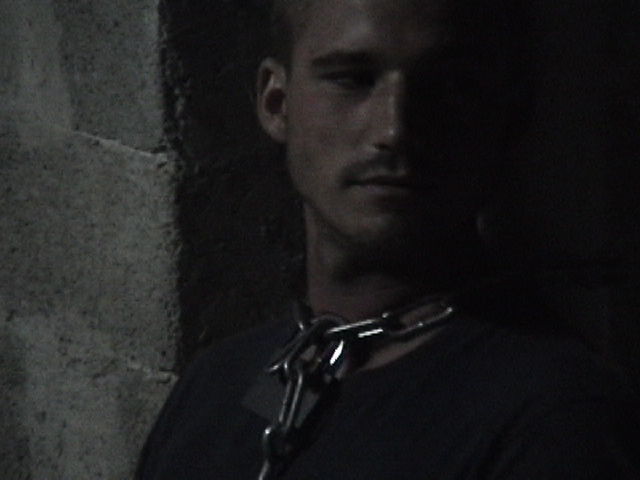 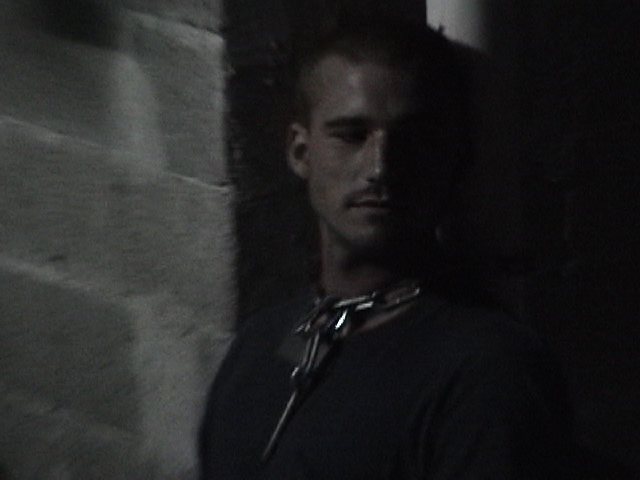 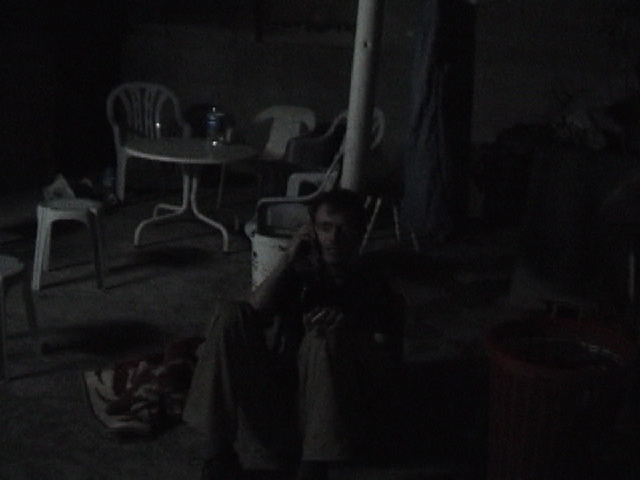 The activists, three from Britain – including myself, one from Sweden and another from the United States, were awoken by other activists staying in the Camp at approximately 1:50am, with the information that there were seven jeeps inside Balata. At this point two of the activists – one Brit/Scot and one Swede – began chaining themselves, by the neck, to metal pillars on the roof of the Abu Salem family home. My-self and another woman from Britain went to the door as we had planned to not open the door to the soldiers and we hoped the voices of international women would de-escalate what was sure to be an intense and frightening experience for all concerned.

When the soldiers arrived, they began to knock loudly and aggressively on the doors of neighbouring homes. We know now that the purpose of this was to obtain a Palestinian human shield to use when they arrived at the door of the Abu Salem house. As soon as the soldiers arrived at the door of our house the human shield began calling to Abu Salem telling him to open the door as he was clearly frightened for his life. At this point Abu Salem went to the door immediately – something that he had wanted to resist but the presence of the human shield led Abu Salem to conclude that his house was less important than the life of one of his neighbours.

As soon as the door was opened soldiers with blacked up faces started to stream into the house telling us to get out, dragging us by the arms, telling us to “shut our mouths” and placing guns in our faces. The two remaining ISM activist remained chained to the roof, an action that led to the soldiers getting very angry, trying to pressure us and the family into giving them the key and persuading the two chained activists to come down out of the house. To which we responded saying the actions of the two on the roof had nothing to do with the family and that we could not persuade them either way, it had to be their decision. We heard, while we were outside in the alley way in front of the house loud noises – shouting and scuffling – coming from the roof. At this point we believe the soldiers were beating the two men upstairs. [We are unable to confirm this as none of us have had any contact with the two, since that night.] Also it is highly probable that they were beaten as the soldiers had kicked myself and the other British woman when we were standing outside in the alley.

After about the hour in the alley way outside, once the family had removed most of their belongings from the house precluding the fridge and the oven the three of us were ordered with the family into one of the neighbouring houses, or we would be on our way to Ariel [an illegal Israeli settlement close to Nablus where there is a prison]. Once we were inside the neighbours house we began calling the relevant embassies and consulates – the British Consulate in occupied East Jerusalem being most unhelpful, simply reminding us of the travel restrictions and asking why we had not registered with them. I also called Andreas’ [the Swedish ISM’er chained on the roof] phone, which was answered by a soldier who refused to give me any information in Andreas’ condition while he insisted on wanting to be my friend and inquiring as to whether I was Andreas’ girlfriend in the hope that he could in some way use me as a blackmailing tool.

During this time the IOF were drilling holes in the walls of the Abu Salem house in order to plant explosives, while the two men were still chained on the roof. There were also gunshots on the roof in order to scare the two men into unchaining themselves. We had been told previously that they would kill the men if necessary. After about half an hour in the neighbours house another neighbour came in to inform us that he had seen both the men being led away from the house blindfolded and handcuffed.

Soon after there was a huge explosion that sent shockwaves through our bodies and rubble and gunpowder infused dust and smoke through the windows of the house we were in – the windows had been left open to avoid breakage. The house of the Abu Salem family was now destroyed. The family, especially Abu Salem himself, remained calm and gave everyone strength, resigned to the yet another aspect of the brutal occupation of their country, Palestine. They are refugees they have been forced from their homes by military aggression before, built a new house before, endured wars, occupation and two intifadas.

The two activists who chained themselves on the roof are currently in Ariel police station considering whether or not to appeal deportation orders. The IOF is currently in breach of the ‘road map’ that calls for a halt to all house demolitions as a gesture of good will. This good will has been shattered in Nablus, with four house demolitions in five days. The only thing that is now concrete is that the Abu Salem family no longer have a home and two incredibly brave activists face deportation for attempting to uphold international law.