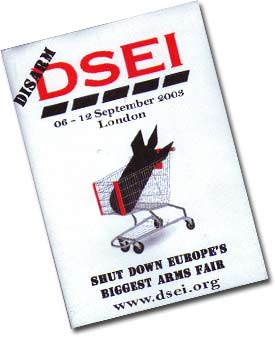 Europe's largest arms fair, Defence Systems Equipment international (DSEi) is taking place from the 9th to the 12th September in London. Protest and action against the arms fair will begin on the 6th September followed by a conference on the 7 and 8th and attempts to disrupt or shut down the arms fair from the 9th.

The week of action is supported by a wide range of groups from all over the country. These include Campaign Against the Arms Trade, CND, Reclaim the Streets, Sheffield Samba Band, the Wombles, Globalise Resistance and many, many more. An international call to action has gone out over Europe as this conincides with the WTO conference in Cancun in Mexico.

In Sheffield there will be a public meeting this Thursday where you can find out more about the arms trade and DSEi. The second half will talk about direct action including some film footage of recent direct action in the UK (if we can find someone with a video projector! Any offers - contact