1st Sept- Buchel (Germany) - This morning an international team of thirty citizens inspectors closed the three gates of Buchel air force base in Germany to carry out a war crimes inspection. It is a public secret that 11 US B-61 tactical nuclear weapons are stored on the base 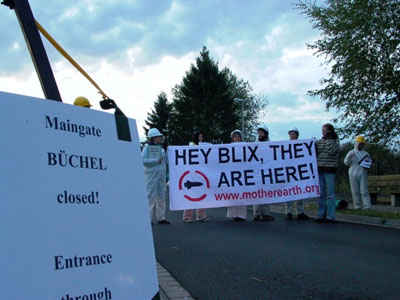 Armed with clipboards, camera’s and pens the inspectors have been gathering information for the International Atomic Energy Agency as well as for the UN where their findings will be reported next year during the Non-Proliferation Preparatory Committee in New York. Their report will also be made public through the Internet.

Pol D’Huyvetter, one of the ten weapon inspectors who travelled from Belgium stated, ”All countries who have signed the nuclear Non-Proliferation Treaty-- including the U.S. and Germany-- have agreed to start negotiations to achieve complete nuclear disarmament. One of the first steps agreed by these states was openness of the nuclear weapon arsenals. Meanwhile, they keep their nuclear weapons bases completely secret. It is for this reason that we need to take action as citizens to investigate the base, and make this information public.”

Although both the German Commander of the base, Mr. Martin Schelleis, and the second in charge, Major Hans Helbach, were not willing to make any official statement about the presence of weapons of mass destruction on the German base, the inspectors uncovered interesting information for their report to the UN and the public. “It is also very alarming that the chief of police Mr. Peter Magerl stated that there is no nuclear emergency plan for when there is a plane accident involving a nuclear warhead” declared Pol D’Huyvetter. The nuclear warheads include materials such as plutonium and tritium, two very toxic radioactive materials which could cause very serious contamination problems, both for the environment and public health.

The citizen inspectors came from Austria, Belgium, Britain, France, Germany, Malta, Sweden and the USA. There will continue to be citizen inspection actions at nuclear related sites around the world. On 25th October there will be an inspection at SHAPE (the NATO military headquarters) in Mons, Belgium.