Activists from Birmingham staged a roof-top protest at the headquarters of Caterpillar(UK), in Desford, near Leicester this morning. The action was in protest at the sale of Caterpillar D9 armoured bulldozers to Israel, and to highlight Caterpillar’s presence at the DSEi arms fair in London next week. 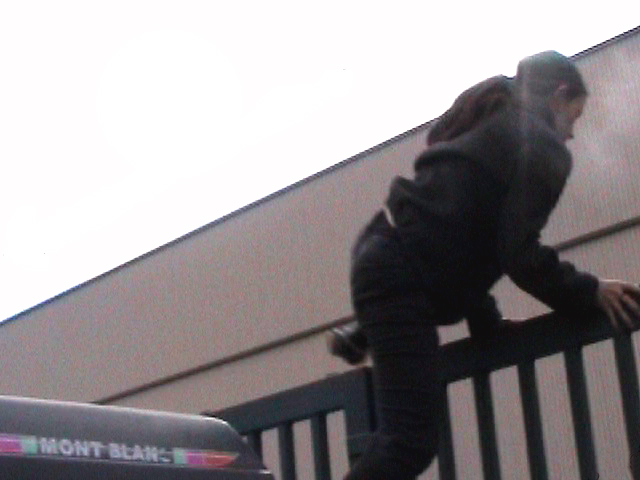 Up and over. No worries. 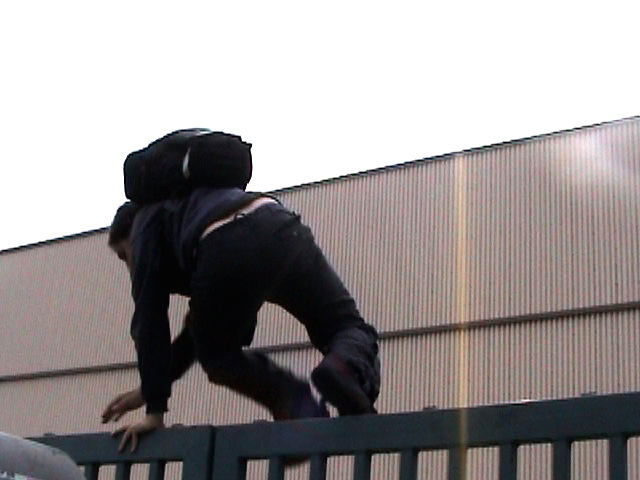 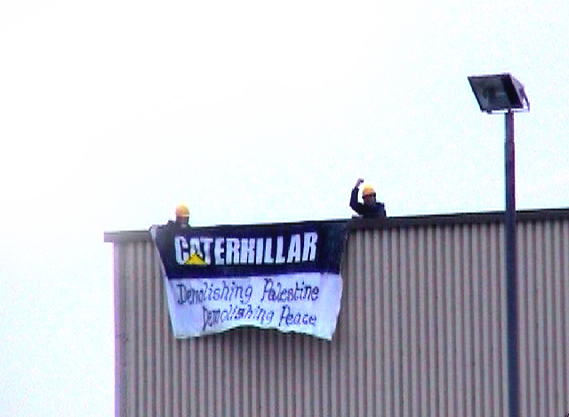 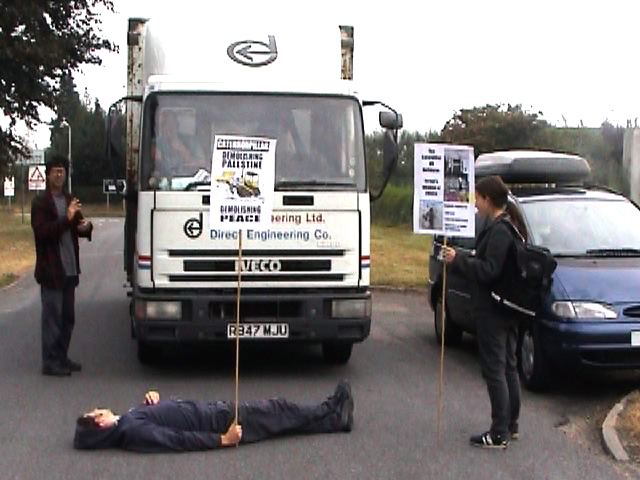 We're not leaving till we get our banner back ;P

Activists from Birmingham staged a roof-top protest at the headquarters of Caterpillar(UK), in Desford, near Leicester this morning. The action was in protest at the sale of Caterpillar D9 armoured bulldozers to Israel(1), and to highlight Caterpillar’s presence at the DSEi arms fair(2) in London next week.

Two of the protesters gained entry to the Caterpillar site and climbed onto the roof of a building near the road. They hung a banner saying “Caterkillar – Demolishing Palestine – Demolishing Peace”(3).

Several Caterpillar Security personnel arrived a few minutes after the banner was unfurled. Some went onto the roof and snatched the banner whilst others on the ground attempted to stop the other activists from filming events and then escorted them off site.

The activists on the roof requested an interview with trade unionists and management at the site. They wished to express their concern at Caterpillar’s involvement in the arms trade and specifically, to question whether its sales to Israel were compatible with the company’s published ‘code of worldwide business practice’(4). The security guards refused to cooperate with any negotiations, and phone calls to Caterpillar did not succeed in resolving the stalemate.

The rooftop protesters eventually joined their colleagues at the entrance to the site. Unfortunately at this point the protesters were forced to call the police as Caterpillar security were refusing to return their banner. They blocked the goods entrance to the site whilst negotiating with the Head of Security, and eventually calling the local police station. Unable to reach an amicable agreement over the telephone, the local police were forced to attend the scene. They informed the Head of Security that the banner would have to be returned immediately (not ‘eventually’). He still refused to return the banner, and a more senior police officer was called to the scene to adjudicate. At this point, the Head of Security explained that their objection to the banner was based on a breach of trademark. The police had a good chuckle, retrieved the banner and returned it to the protesters, who then went home.

1. Since the beginning of Israel’s occupation of Gaza and the West Bank in 1967, Israel has destroyed over 7,000 buildings, leaving 50,000 men, women and children homeless. The IDF’s weapon of choice in its home demolition campaign is the specially designed Caterpillar D-9 bulldozer. Caterpillar bulldozers are used for more than house demolitions. Since the Intifada began, Israeli troops and settlers using Caterpillar equipment have uprooted an estimated 385,000 olive trees – as well as orchards of dates, prunes, lemons and oranges. The economic hardship this has imposed on thousands of Palestinians comes on top of already dire levels of unemployment and poverty in the Occupied Territories.


On March 16th, 2003, Rachel Corrie was crushed to death by an Israeli D-9 Bulldozer whilst trying to prevent it demolishing the home of a local pharmacist in Rafah.. Rachel was clearly marked in a bright orange fluorescent jacket and had been communicating with the bulldozer driver for over 2 hours previously. Within 4 weeks of Rachel’s death, two more international peace activists were seriously injured, Brian Avery shot in the face, and Tom Hurndall, shot through the head. Tom is unlikely to survive whilst Brian still has months of reconstructive surgery ahead. Rachel, Brian and Tom join the 2,200 Palestinians killed, and over 20,000 seriously wounded by Israeli soldiers and settlers since September 2000.

2. While the WTO circus of economic oppression goes on in Mexico, DSEi, Europe’s biggest arms fair is coming to London! DSEi is a globalised supermarket for guns, bombs, military planes, Caterpillar D-9 Bulldozers, small arms, mines and tanks. Disarm DSEi, a campaign to shut down DSEi, is ongoing from 6th - 12th Sept (www.dsei.org).

The British Government sponsors DSEi with millions of tax-payers’ money. They’ve also invited countries with sustained human rights abuses, such as Israel, Turkey and Indonesia, and often encourage arms supply to both sides in areas of conflict, such as India and Pakistan.

3. With thanks to Carlos Latuff (

“We look for suppliers and business allies who demonstrate strong values and ethical principles … We avoid those who violate the law.”

“Caterpillar accepts the responsibilities of global citizenship. Wherever we conduct business or invest our resources around the world, we know that our commitment to financial success must also take into account social, economic, political, and environmental priorities.”

Caterpillar has repeatedly failed to respond to letters about the nature of their trade with Israel and its compatibility with their published code of conduct. For more information see