A samba action has taken place in London at the BAE offices in London just before 9am this morning. An attempt was made to bestow an award to the company. Entry was gained to the foyer by 6 suited anti-arms campaigners. There were two arrests of people using D-locks on tables. The people arrested are now at Charing Cross Police Station where there has been a supportive samba noise demo. Click here for full report - pictures [1,2] - [ 2 short video clips, longer video clip on Imc Italy]- audio.
On the way from the BAE action to Charing Cross police station the group stopped by at the Army Recruitment Office to voice their protest against the war machine.

In the morning, delegates to the NATO military committee meeting in Cambridge were greeted by a lively show of the street theatre "performing for peace" on Monday morning.Pictures. 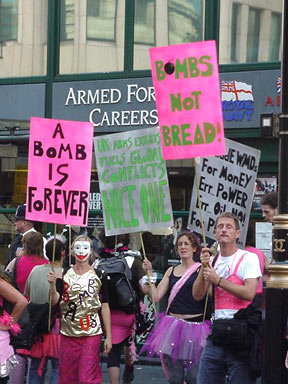