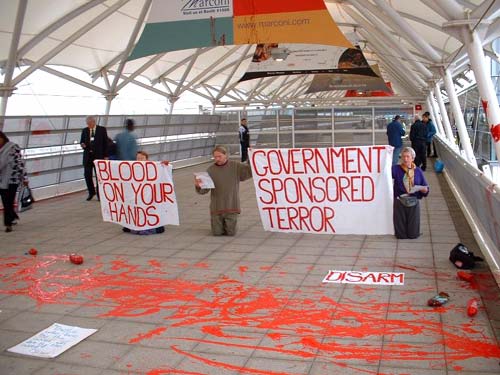 London Catholic Workers, Scott Albrecht, Angela Broome, and Zelda Jeffers effectively blockaded the arms fair by pouring a 4'x15' pool of red paint, symbolising blood, on the walkway which is the main pedestrian entrance to the Excel Centre. They also poured red paint on the signs leading up to the walkway. The three held signs stating "Blood on Your Hands" and "Government Sponsored Terror". They were accompanied by friends in prayer and Buddhist chanting and drumming. The police respectfully allowed them time to finish their liturgy, then they were arrested.

The DSEi (Defences Systems and Equipment International) fair is named one of the leading weapons shows in the world. Zelda Jeffers (53)is a nurse who works in Brazil and Nicaragua and has seen the results of the arms trade first hand. Angela Broome (63), a long term peace campaigner states: "my government's promotion of violence to settle conflict has to be opposed". Scott Albrecht (41), former U.S. Military, states: "DSEi, Excel and the British government are wreaking wholesale terrorism on one third of the world's nations. The war on terror begins at home, DSEi must be disarmed".