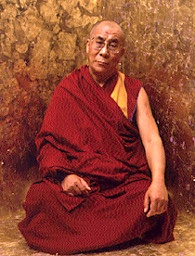 The Dalai Lama said Wednesday that the U.S.-led war in Afghanistan may have been justified to win a larger peace, but that is it too soon to judge whether the Iraq war was warranted. "I think history will tell," he said in an interview with The Associated Press on Wednesday, just after he met with President Bush.

"In principle, I always believe nonviolence is the right thing, and nonviolent method is in the long run more effective," said the Dalai Lama, who after the Sept. 11 attacks had implored Bush to avoid a violent response by the United States.

The exile Tibetan leader, awarded the Nobel Peace Prize in 1989, said the Vietnam War increased suffering and was a "failure." But, he said, some wars, including the Korean War and World War II, helped "protect the rest of civilization, democracy." He said he saw a similar result in Afghanistan - "perhaps some kind of liberation."

"The people themselves, I think, suffer a lot under their previous regimes," he said. But he was adamant that the United States not lose sight of rebuilding Afghanistan.

The Dalai Lama urged Bush, in a letter on Sept. 12, 2001, to "think seriously whether a violent action is the right thing to do and in the greater interest of the nation and people in the long run." Asked whether the Iraq war was just, the Dalai Lama said the situation there is "more complicated" and will take more time before he can judge.

The Dalai Lama said he had briefly raised these concerns to Bush during their meeting in the White House residence. He declined to say what Bush's response was.

The Tibetan Buddhist leader, who is a five-city, 20-day tour of the United States that is timed to coincide with the Sept. 11 anniversary, called on Americans to channel their lingering grief "into a source of inner strength."

"Big, unthinkable tragedies happen," he said. "Now, instead of keeping that and developing hatred or sense of revenge, instead of that, think long-term. The negative event, try to transform into a source of inner strength."

He likened the terrorist attacks to Tibetans' struggle to reclaim their country from Chinese rule. Communist troops took over Tibet in 1951, and the Dalai Lama fled in 1959 during a failed uprising. He now lives in India.

"In my own case, many experiences of unthinkable situations have happened, but we never lose our hope. We never let negative emotions (rule), so that's immense benefit - including my own health," said the Dalai Lama, who was hospitalized last year with stomach ailments. "More peace (of) mind, more calm mind, more compassionate mind - very good for my health!" he said with a hearty laugh.

The White House meeting irritated Chinese authorities, who said in the official China Daily newspaper that the visit to the United States "constitutes a serious intervention into China's internal affairs." Nevertheless, the Dalai Lama got an audience with Bush; Secretary of State Colin Powell and his top aide on Tibet, Paula Dobriansky; Laura Bush; White House chief of staff Andy Card; and a deputy to Vice President Dick Cheney, Scooter Libby.

The Washington-based International Campaign for Tibet, however, said it was high time Bush received the Dalai Lama in the Oval Office, not in the White House residence - a symbolic step that would signal a stronger commitment to the Dalai Lama's teachings, said John Ackerly, ICT's president.

"Our war on terrorism should include embracing nonviolent leaders, and not ushering them in through the back door of the White House," Ackerly said.

The Dalai Lama, regarded by Tibetan Buddhists as the 14th incarnation of the Buddha of compassion, broke into laughter often during the interview, even when the conversation turned to serious topics.

He laughed when he described his political role as one of "semi-retirement," when he stumbled on a word, and again when he characterized Beijing's occasional "bullying" of Tibet.

He gestured continuously, the beads on his bracelet rattling at the end of his bare arms. The 68-year-old Dalai Lama had flecks of gray in his close-cropped hair, but looked decades younger than his age.

The Dalai Lama and his followers seek greater autonomy for Tibetans while keeping the region part of China. Beijing demands that the Dalai Lama publicly renounce any claim to Tibet's independence, and says he is welcome back as a religious leader, but may have no political role.

The Dalai Lama said he saw hopeful signs of an agreement. Direct contact between his envoys and Chinese officials resumed last year after an impasse of nearly a decade.

He called China's new president, Hu Jintao - a former top Chinese official in Tibet - "cautious," but said he hoped Hu will continue a process of liberalization. But he also said he was concerned about frustration among Tibetans after decades of Chinese rule, and amid an "overwhelming" influx of Chinese into Tibet. "Not necessarily intentionally, but unintentionally, the cultural genocide is taking place," he said.

Asked whether decades of frustration could lead to violence or even terrorism, he paused. "Oh, possible," the Dalai Lama said. "But up to now, Tibetans, in spite individual views or feelings, I think generally they listen to my approach. Strictly nonviolent."

what the Dalai Lama didn't mention....presumably

I wonder if The Dalai Lama mentioned those wonderful 'democratic' leaders who have enjoyed Washington's good graces: Suharton, Saddam Hussein, Mobutu, Noriega etc? Or that leading human rights organizations point out year after year, virtually all U.S foreign aid is illegal (from the leading recipients on down the list) because the law bars aid to countries that engage in "systematic torture"? Or the World Court condemning the United States for international terrorism, for "unlawful use of force," and for violation of treaties in Nicaragua? Or that the United States is the only country that has vetoed a UN Security Council resolution calling on all states to observe international law?

Tibetans have long made the mistake of behaving like a conventient stick of US Imperialism, with which to beat down China (no, I'm not defending China either so don't even start), so it doesn't surprise me that the Dalai Lama would continue further down this naive path of supporting the brutal US regime.

When it comes to supporting Hitler, let us not forget those peace-loving Palestinians, who, under the leadership of the Grand Mufti of Jerusalem, Haj Amin Al-Hussein, formed a direct alliance with the Adolf himself. In 1943, after meeting with Hitler in Berlin, the Mufti stated: "The Treaty of Versailles was a disaster for the Germans as well as for the Arabs. But the Germans know how to get rid of the Jews. It is that which brings us close to the Germans and sets us in their camp... up to today."

Remember my friends, this was a full four years before the state of Israel even existed.

Let me rephrase that: the Arab/Islamists/Palestinians were seriously talking about 'getting rid of the Jews' long before there was any Israeli state, any 'occupation', or any refugees.

And guess which fun-loving freedom-fighter has named the Grand Mufti as his first and greatest spiritual mentor? That's right, Yasser Arafat.

In that case I guess its fine for the Israelis to slaughter as many women and children as they like, isn't it?

DRIVE THEM INTO THE SEA! SIEG BASTARD HEIL SHARON!