DSEi: In Solidarity With Anti-WTO Protests in Cancun

Thousands of protesters, peasant and farmers organization, workers, environmentalists, trade unionists and many other groups opposing the World Trade Organization, corporate globalisation and militarism from around the world and Latin America are converging in Cancun, Mexico this week, the location for this weeks WTO meeting.

On Wednesday, Korean farmer Kyong Lee took his life in protest against WTO policy, while demonstrators tore down the fence surrounding the summit but refused to enter the summit grounds. The Mexican president Vicente Fox had ordered a police-led campaign of misinformation and barricades (Report) and prevented a teach-in organized by the International Forum on Globalization. Police repression is high. At least 8 protesters have been seriously injured during the Thursday march. Many other protesters throughout the week have been injured, threatened with deportation, banned from Cancun and refused entry to the country.

A timeline of up-to-date events as well as ¡Radio Hurakán! (Mirrors 1 2 3) are also available. 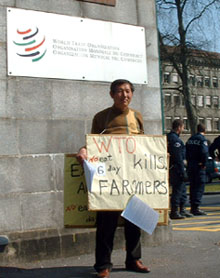 Thursdays reports from the IMC live radio stream say at least 40 people were injured yesterday - far higher than the mainstream/corporate media are reporting. Earlier, a Korean farmer and leader of a farmers organization committed suicide in protest of the plight of farmers around the world facing the WTO's devastating policies.

Days of Action:
Tuesday 9/9: First day of Action: a festive march (Report, Video)
Wednesday 10/9: Peasant and Farmers march
Thursday 11/9: Actions and March. Timeline of events
Sunday 13/9: A march is planned as part of the Worldwide Day of Action Against Corporate Globalisation and Militarism.

Other activities:
The borderland between Tijuana to San Diego, part of the maquiladora (assembly line factories) free-zone and where more then four thousand human beings already have lost their lives due to the US migration-policies. A call for a week of action to highlight the relation between militarism and "free" trade.