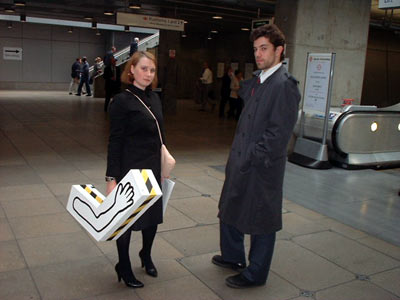 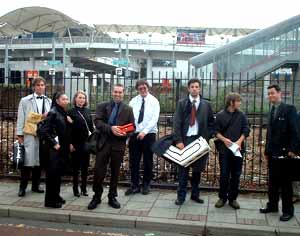 After having spent the last week constructing prosthetic limbs (ARMS) and cutting the heads off action men (War Heads), we dolled ourselves up in our most corporate attire and headed down to the docklands dressed as 'Arms' traders.

Our first journey on the tube consisted of four of us travelling in a carriage with a variety of suited arms traders heading to the ExCeL centre at Custom House DLR station. The aim was to act like arms traders from hell, to try and sell limbs to the real arms traders and also loudly let other passengers on the train hear about the disgusting trade that the people sharing a carriage with us were involved in.

Greenman started off the festivities by switching from respectable suit to pretending to use his umbrella as a machine gun and shooting down everyone on the platform. We boarded the train and started a discussion on what exactly we were all hoping to buy that day down at the fair. Cluster bombs, Baby maiming rockets, land mines, nuclear war heads etc. Pretty soon the arms industry members around us realised that this was not going to be a normal commute.

Greenman walked around the carriage attempting to get people to sign his petittion to kill the protestors and let us all 'Try before we buy' the weapons on sale by using the demonstrators as live targets. Chloe was busy doodling pictures of bombs, missiles, blood and severed limbs, and Boblonski and myself were talking about the great fact that 10% of British Tax money subsidises the arms industry.

As we got closer to ExCeL we began to cheer a variety of rallying chants such as 'KILL KILL KILL KILL' to try and warm up our fellow arms trading passengers before they got the the fair. We pulled in at Custom House and marched up the stairs to the main entrance with the traders. Unfortunately I was pulled over by police instantly (the case of arms might have given me away),Greenman and Boblonski were also pulled aside, however agent Chloe nearly wandered through the security in the confusion of trying to find the others. We were all eventually marched out of the DLR and told not to come back.

After a short trip to the convergence centre and cafe for some breakfast we learnt that protestors had shut down the DLR by locking themselves to it, and the trains to each other. This meant that there would be a load of dealers stuck on trains with nowhere to go. We decided the best form of action would be to catch a bus back up the line and get on the trains with the frustrated dealers.

Upon arriving at Canning Town we saw that there was a massive police presence, and that it would not be a great place to start winding up dealers. On the platform we bumped into Agents Kamui & Carnivorous Panda dressed in their corporate best. The trains were running in the opposite direction so we caught the train west to Limehouse where we could cross the platform and (as the protestors had now been cut free) get the train back to the fair with the dealers.

Second time around our banter was getting better, there were also more protestors on this train as well as arms dealers. We started up our obnoxious arms dealer routine letting everyone on the train know just how much we loved explosions, death and blood. The protestors on the train started ranting about how the arms dealers were responsible for making money on the back of an industry that kills people. That in the 1990's 90% of all war casualties were civilians, just like us on the train. One of the protestors started to mistake agent Boblonski for a real dealer and started shouting at him. He turned around and said that he thought it was important that the people going to the fair tried to back up their moral position, turning around and addressing the real dealer next to him. 'Come on' he baited 'tell the people on the train how you justify your job, tell us yor moral standpoint'. Unsurprisingly the dealer was silent, as was the man next to him. 'This is your opportunity to stand up to the criticism yor gettting, and you have nothing to say?', like a pair of chastised schoolboys the two suited arms dealers hung their heads. (You have to have a small rocket to be excited about buying big ones we think).

The train was about to pull into Custom House station again and so everyone on the train started a big cheer for all the arms dealers going off to ply their vulgar trade. 'Ooooh I'm so excited' called out or spoof dealers 'I can just smell the death'. As the doors opened the entire carriage was cheering and mocking the dealers, patting them on the back and looking at their red faces. Unfortunately the police were also waiting for us on the platform and pulled two of our dealers off the train. I was pulled off unfortunately by the very same officer who caught me trying to enter the fair in the morning. 'I'm sorry son, this is the end of your journey'. We were marched up away from the platforms and informed that if they caught us on the DLR again then they would remove our right to travel. 'You have been warned, if I see you again you will be in trouble'. Agent Greenman was questioned under the anti-terrorism act and we were all marched out of the station.

So we are banned from the DLR, luckily protestors had once again locked onto the trains and the DLR was shut down anyway! Also pulled of the train was a chap called Joel, dressed up as an arms trader with a saxophone case full of manequins arms. A short walk up to Canning Town and we bumped into Agent Ricky carrying a case of dolls heads with nuclear signs on them (Nuclear War Heads). By this point we had amassed quite a crew of arms dealers.

We got up to Canning Town Bus station and saw a bus filling up with arms dealers, quick sharp we were on board, and no sooner had the bus pulled out than our panto started again.

'So gentlemen, before we get to the fair, does anyone fancy a bit of black market arms dealing?'. No replies from the dealers, 'Are you buying or selling today', 'I guess causing' replied a man claiming to be a politician!

Soon enough we were talking of maimed children, murdered civilians, torture from oppressive reigimes that had been invited to the fair and other such pleasant chat. The dealers were once again silent and sinking into their chairs. More cheering and jeering as they got off, and we headed away from the police lines.

Later on we caught another bus full of dealers from Canning Town, although this one was to be by far the most successful. No sooner had we begun to pull out than protestors sat down in the road infront of our bus. We were trapped on a bus with the dealers. The police were so busy dragging protestors around outside that they paid no attention to the suited troublemakers on board. After a bit of comedy banter to break the ice with our fellow passengers, we asked the suited chaps on the bus if they were off to the fair today. 'Oh no, not at all' replied two. Another admitted that he was in the arms trade. 'So what do you sell?' we asked, 'I can't say' he replied, oh how very James Bond.

'I'll tell you what, I'll name things and you just nod' replied Boblonski. 'Do you sell civilian maiming anti-personnel mines? How about cluster bombs? Leg ripping schrapnel bombs? Children killing delayed timer bombs? Wait a minute I thought I saw a twitch then!'

The protestors were dragged away and our bus set off for ExCeL, the banter continued and soon the other public on the bus were joining in berating the dealers. As we pulled up to the stop outside ExCeL one of our crew announced 'Lets have a big cheer for all the people about to get off and deal in death, I hope they have a great day'. The whole bus was cheering as the dealers were getting off, the funniest moment was when the two that had denied even going to ExCeL had to stand up and march with red faces past mothers and children mocking them.

The protests outside were taking on the shape of cat and mouse games between police and protestors, chasing each other around and blocking roads, busses and trains. Transport for the delegates was chaos. Unfortunately the police's response was simply to out number the protestors and surround them. Up to 3500 police were on patrol around the fair. It seemed to us that it was a pointless exercise to simply chase around and wind up the police, when there were busses of the actual enemy travelling around.

The public transport system was largely un-policed, especially if you could slip by wearing a suit. Large shows of numbers on the streets are an important part of protesting, but we think that targetted actions on the people that count are as valid if not more. Hopefully next time we will attract more disguised protestors to join us in winding up, and making life hell for the dealers.