Indymedia Public Access Point for DSEi - thanks to all imc'istas

A big thankyou to all of the imc'istas who helped set up and run the indymedia access point at ground zero, right next to the ExCel centre at St Annes Parish Hall, as well as everyone who helped and contributed to the reporting, both on the streets and behind the computers in london, the rest of the uk and further abroad - as well as the radio crew who streamed on the net over several days and the video folks who managed to publish a lot of good footage. 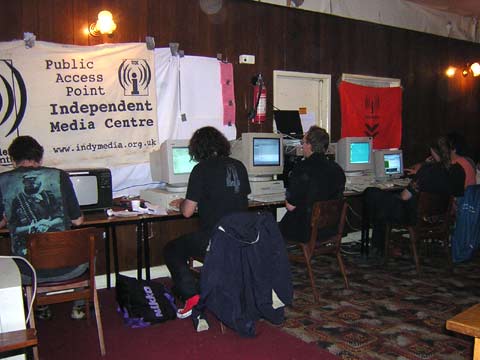 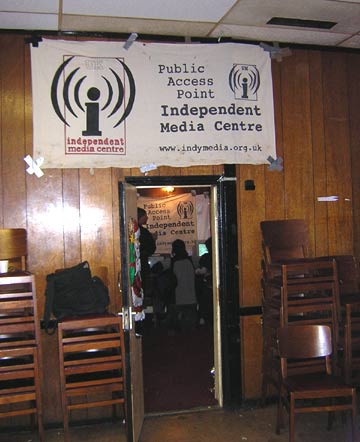 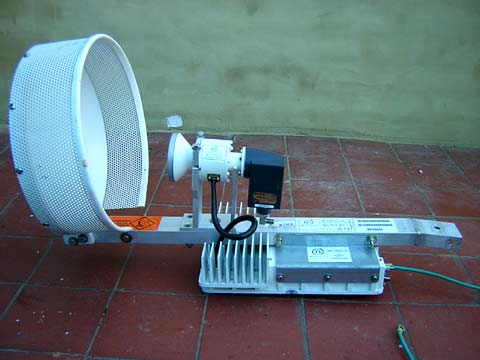 The access point facilities in a side room at St Anne's hall were available during the day, but the hall was used by other groups for accomodation in the evenings. Internet connectivity was provided via satellite set upon the roof, not the first time we've tried to use it, but certainly the first time we've made it work in london! (Big thanks to psand.net for sorting it!) The computers were blagged and borrowed from ace folks including ComTech in Brixton.

The police showed regular interest in the hall and seemed a little shocked when the satellite kit was unloaded - "what's this, it looks like communications equipment?!" they also threatened to use section 44 of the terrorism act on that occasion, and later did use it against people seting up the access point.

There were some quite sublime moments, such as the time when GR began dismantling their big orange cardboard tank to carry it outside the hall and load it into a van... the forward intelligence team (FIT) officers began reporting furiously into their radio and taking notes, and before you could say 'threat to national security', two riot vans were on the scene, a police helicopter hovered above the hall and a senior police officer visited in person to check on the situation - excessive policing - nah!

It was a great learning experience, made all the more exciting by the participation of imc'istas from local collectives around the country, as well as those abroad who ensured reports filtered to other indymedias around the world. The next time something big like this comes along we'll be even better prepared, and can set up a much bigger fully functioning media centre.