The interactive CD-ROM vison of "Report from Baghdad" is on sale; with articles, over 50 photos, and hours of audio & video interviews. USD$15.00 plus USD$3.50 S/H (detail information at the end) 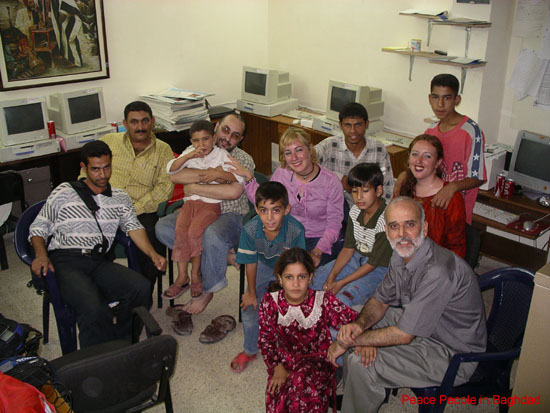 Despite the grim reality, many people from around the world are coming to Iraq to support the peace and justice movement. Global Exchange, Voices in the Wilderness, Amnesty International, Code Pink, and many other peace activists from Japan, Korea, Germany, Italy, and France are here showing solidarity with the people of Iraq.

Since mid-April when the major assaults in Iraq ended, thousands of foreign humanitarian workers and human rights activists from around the world have come to Iraq to work with the United Nations, non-governmental organizations (NGOs) and human right groups. They've come with the intention of helping the people of Iraq, all of this outside the scope of U.S. occupational forces and its U.S.-run Coalition Provisional Authorities (CPA) (the U.S. occupiers' shadow government in Iraq set up after the invasion).

Unlike during Saddam's regime, when every foreigner needed to fill out complicated paperwork to come to Iraq, and their activities were limited and monitored by the government, in post-war occupied Iraq, there's no immigration authority nor government bureaucracy to register, monitor or coordinate the works of all international agencies.

As a result no one really knows how many international organizations are in Iraq. Baghdad is now the "wild, wild west" of international and Iraqi organizations. It's easy to come to Baghdad now and anyone can do it. A group can just get an apartment or hotel room and set up their own office without going through any paperwork. Everyday there're new groups popping up and in many cases, no one really knows who they are. They range from faith-based organizations to media activists; medical aids groups to human rights monitors. Some groups are multi-million dollar operations with hundreds of staff members, while others are just mom-and-pop joints with only one person in Baghdad.

The human rights operations in Iraq are just another example of the successes and failures of international organizations in developing countries.

Medea Benjamin from San Francisco's Global Exchange and United for Peace and Justice, has brought several delegations to Iraq since the end of the war to open a Occupation Watch center, an international human rights office in Baghdad to monitor human rights abuses by U.S. occupying forces in Iraq. "It has been a amazing experience here, and [you] get opinions from such a cross-section of Iraqis," she says.

Compared with newcomers like: Occupation Watch, Voices in the Wilderness is considered to be one of the oldest foreign human rights groups in Iraq. Ramzi Kysia, from Washington DC, a third-generation Lebanese-American, has spent one of the past two years in Iraq for Voices in the Wilderness. He was here during the first two weeks of the war, and expelled from Iraq by Saddam's government. After the fall of the regime, he immediately came back to Baghdad. At the peak, they had 33 people in Iraq during the war from across the world. As time passed, volunteers left and new replacements arrived.

Voices in the Wilderness set up an independent media center in downtown Baghdad. They're working with a group of university & high school students, and people in their 40s, to start an independent newspaper called Al-Muajaha (The Iraqi Witness,

http://www.almuajaha.com). Currently, they desperately need financial donations to run the newspaper, and a full-time staff with journalism background who can speak English and Arabic to run the Baghdad Independent Media Center.

Voices in the Wilderness has been coming to Iraq for the past eight years and has brought about 500 people from across the world for the peace missions. "Iraqis are the most generous, the most hospitable of all the Arabs. People here are unbelievably kind to you. They take you their homes. They welcome you as members of their families. They will give everything that they own." Ramzi says, "I think the occupation has made [everyone] increasingly violent and hostile."

Echo Ramzi's concern, Caoimhe "Cuiva" Butterly, one of the Voice's peace volunteer from Ireland, says "I think it is really necessary not only...witness the truth and reality [in occupied Iraq] to the outside world." She says the war had created such deep divide between middle east and the west that "it's very necessary [for us] to be present here to represent an alternative faces of the west [to the Iraqis]" She concluded. Cuiva is a very brave women, she made a very challenging statements against the Iraqi Interim Council during their opening ceremony on July 13.

Ewa Jasiewicz, another Voice's peace volunteer, is a naturalized British citizen originally from Poland, she spent much of her past year in Palestine. She has been in Iraq since May, and planning on staying until next year. She's currently helping the homeless Iraqi-Palestinians at the Palestine refugee camp in Baghdad.

After the war, over 1,000 Iraqi-Palestinians were evicted from their Baghdad apartments and forced to stay in the refugee camp because there is no Iraqi government to pay their rent subsidy. Ewa, Cuiva and other international peace workers from the Voice had setup a solidarity tent at the camp to help the refugees. While the Palestinians in the camp generally welcome the international activists, they also think they are ineffective in helping them.

Ewa admits there are problems in the international aid groups in Iraq. While she supports more human rights groups coming to Iraq, she says, "There's a lot of bullshit coming up. Everyone's got their own NGO, and everyone wants to set up their own NGO [in Iraq]."

Another problem Ewa admits must be confronted is mistrust from Iraqis. She says at the beginning when she arrived, people were very suspicious, on guard with her, and they were wondering why they're coming. In some cases, Iraqis were very hostile toward them, particularly men, she says "because of the representation of western women in every American daytime TV show or film as flirty, half-naked bodies; female peace activists from the west aren't viewed as volunteers in solidarity [in Iraq]."

What is the future of the international peace movement in Iraq? Ewa says listening to them is very important. "You know, everyone wants to know why you are here. Everybody wants to know why your government [U.S. and U.K] is responsible for this [invasion], and picks you as the representative of your governmental policy, or projects upon you a kind of revenge or frustration or anger they feel against the policy of your government, or tells you what your government has done to them for many years, which you have listen to, you know. You've got to absorb all their anger because it's the first time lots of [Iraqi] people [have] had [this chance]," she concludes.

…Thousands said it,
with faith, with flattery, in opportunism -
And the people who didn't say it were humiliated.
Who can disbelieve in Saddam?

Today, we are still hearing it,
Without outlawing abomination,
Or commanding to the right path -
Without our trying to do anything….…

Dear God, when will we be liberated?
From our fears, our anguish - When? When
Will we find peace?
(Excerpt from poem "Saddam Will Return" by Saif Al-Haddad)

Voice in the Wilderness

- People of Iraq, former Iraqi military commander, general manger of
- U.S. Military: interview at U.S. military base, and follow their patrol and raid in Baghdad;
- Human rights workers from UNICEF, Voice in the Wilderness, Amnesty International;
- Shi'ite and Sunni religious leaders from Baghdad, Fllujah, and more!

Each CD costs: USD$15.00 plus USD$3.50 S/H (work both PC and Mac)
The CD sells will be benefit the Baghdad Independent Media Center, ActionLA, and PeaceNoWar.net
*Additional donations are welcome, and it will be tax deductible.

Information for antiwar movements, news across the World, please visit:

*PeaceNoWar is an activist project of ActionLA
Action for World Liberation Everyday!
URL:

http://lists.riseup.net/www/subscribe/actionla
or send e-mail to:

*To Translate this page to Arabic, please visit ajeeb.com: