The School of the Americas-Hip Hop

The School of the Americas(in georgia, u.s.a) 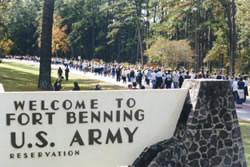 In 1993, the United Nations truth commission on El Salvador named the army officers who had committed the worst atrocities of the civil war. Two-thirds of them had been trained at the School of the Americas. Among them were Roberto D'Aubuisson, the leader of El Salvador's death squads; the men who killed Archbishop Oscar Romero; and 19 of the 26 soldiers who murdered the Jesuit priests in 1989. In Chile, the school's graduates ran both Augusto Pinochet's secret police and his three principal concentration camps. One of them helped to murder Orlando Letelier and Ronni Moffit in Washington DC in 1976.

Argentina's dictators Roberto Viola and Leopoldo Galtieri, Panama's Manuel Noriega and Omar Torrijos, Peru's Juan Velasco Alvarado and Ecuador's Guillermo Rodriguez all benefited from the school's instruction. So did the leader of the Grupo Colina death squad in Fujimori's Peru; four of the five officers who ran the infamous Battalion 3-16 in Honduras (which controlled the death squads there in the 1980s) and the commander responsible for the 1994 Ocosingo massacre in Mexico.
etc, etc, etc........