This morning, an international "citizens inspection team" from Voor Moeder Aarde, Gent, were arrested inside the illegal US nuclear weapon base of Lakenheath, in the South East of England. 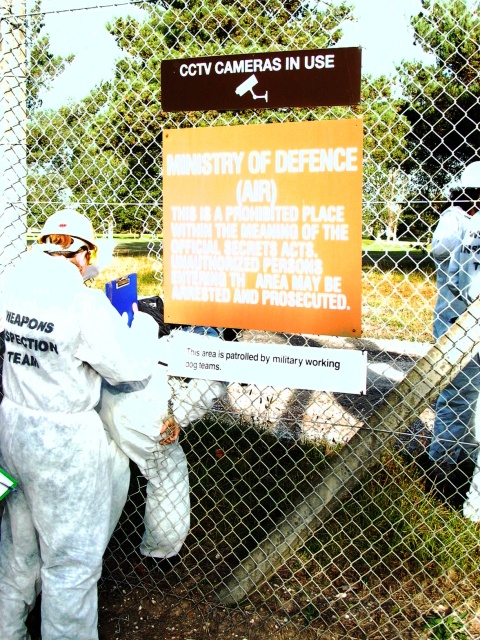 The group of 5 people from Belgium joined local activists to take part in a day of nonviolent direct action organised by the "Lakenheath Action Group". They have been arrested for criminal damage after entering the base, where they had intended to carry out a citizens weapons inspection. The group is opposed to the presence of nuclear weapons at the base, which have been declared illegal under international law.

Anu Korhonen, legal support for the international citizens weapons inspection team said: "We have travelled to USAF Lakenheath to search for evidence of weapons of mass destruction. We are appalled at the hypocrisy of the United States, who are willing to go to war over unconfirmed reports of WMD in Iraq, whilst they maintain their own illegal nuclear weapons at Lakenheath and threaten to use them."

Photographs of todays and yesterdays actions will be available later today.

Get in SHAPE
Bomspotting action at the NATO military HQ
25th October 2003, 11am /// Mons, Belgium