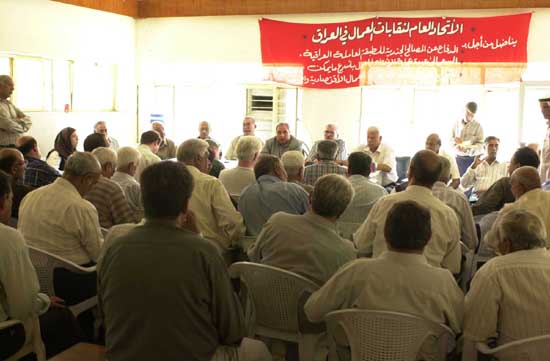 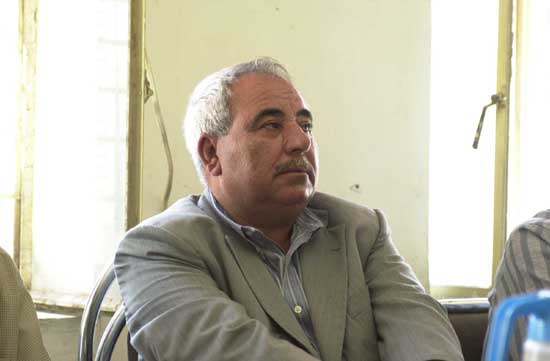 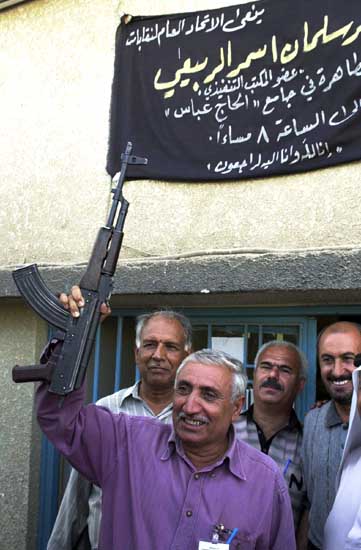 
We were warmly welcomed into the building of the communications union, which has been democratised, and Baathist leadership deposed. The building was one of the sites where genuine trade unionists were tortured by the previous Yellow (Baathist Controlled) Union. Now it is used by the Iraqi Trade Union Federation as a base to build the new independent unions.
We were addressed by Rasim Alwadi who described to us the creation of 12 new democratic unions and the open conference where the 37 member committee of the ITUF was elected. The conditions they are working under are harsh their building is still damaged, there are very few facilities and financial situation with union funds frozen by Paul Bremer is bleak.
Rasim listed the organisations that support the federation, which include: The Iraqi Communist Party, Arab Social Movement, Iraqi National Accord and Democratic and Independent individuals. They have excluded “Baath Party senior officials and those tainted by violence, criminal, thieves and saboteurs”.
At the foundation meeting of the federation a position was agreed stating opposition to the war and to the continued occupation. There were diverging views however on the relationship the union should have with the governing council. Whilst there is unity on the demand for trade union rights, the right to assembly the right to demonstrate there was disagreement if these could be placed as demands for a new constitution as this could be seen as legitimising Paul Bremer puppet Governing Council.
The trade union movement of Iraq has been able to assemble up to a million people on the streets of Baghdad in its past before Saddam. Under Saddam May was distorted, Rasim told us “We have started the process of building for May Day, before it was a nationalist day – now after the fall of the regime, we have started to build this celebration it is part of International, Arab and Iraqi tradition”
The federation executive welcomed the suggestion of the possibility of workers from other countries in the world to join this demonstration.