"Urgent. The situation is critical, the people resist and there is a massacre looming", so the cry for help on the frontpage of Indymedia Bolivia. Yesterday the civilian strike was continued in El Alto, the police and the military for repression and another person died. There is much anger in the population and they state, that they keep on protesting untill the "Gringo" resigns. They declare, that the city "La Paz" supports the protests, that "the Gas is for all and we have to defend it." 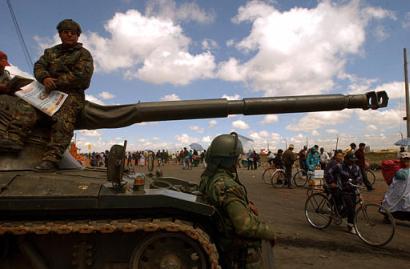 On the part of the government there are rumours about the state of emergency or a coup d'état, which politicians and militarys would prepare with all the bloodshed it would mean for the Aymaras, the inhabitants of the Highlands, farmers and all Bolivians who fight for the gas.
In some commercial medias it was indicated that the state of emergency was already prepared, but was delayed because of an attempted police mutiny.
The announcement of the mobilisation in Chapare and the transport workers continued to intensify the situation.
The communication becomes indreasingly more distant, the anger of the people grows and a violent outcome seems apparent.

The protests have largely expanded in the last weeks, several provinces of the Highland are in resistance and big cities like La Paz and El Alto are blocked off the rest of the world.
And repeatedly there are violent clashes between the police/military and the population.

Three days ago, at a demonstration in the direction to LaPaz, the miner Huanuni José Luis Astahuichi (41) and the construction worker and student Ramiro Vargas Astilla (22) from El Alto has been killed.

The 19th of september, at a national demonstration against the sell-out of the gas with 100 000 participants, also 5 persons got killed when military units and police attacked street blockades in Altiplano (Highland).

Felipe Quispe, the leader of the farmers union CSUTCB, has then declared about 2 weeks ago, that the Aymara, who are living in the north of Bolivia, have taken to arms in conflict with the government.