Alex Gordon is a national executive member of the RMT
Pics:Guy Smallman 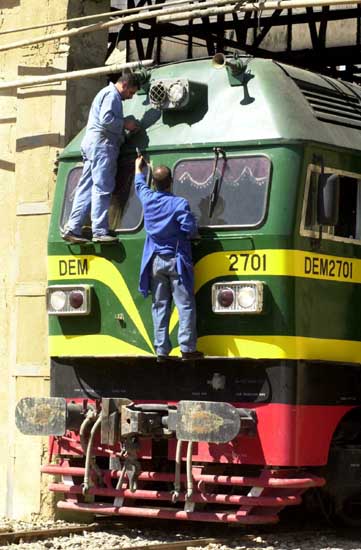 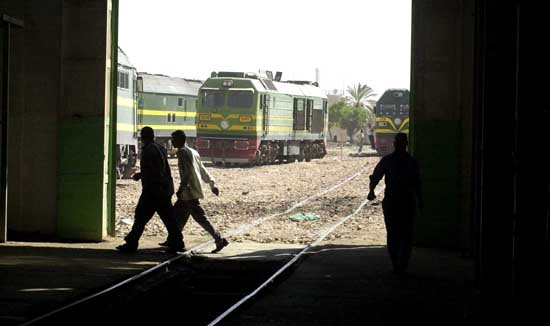 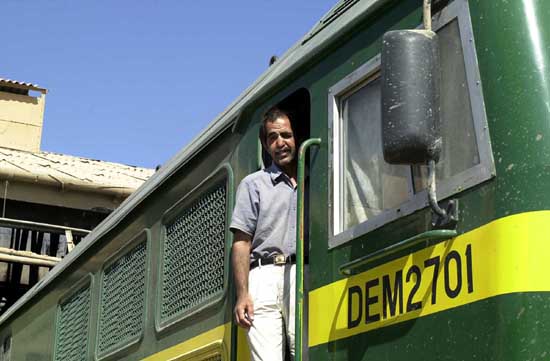 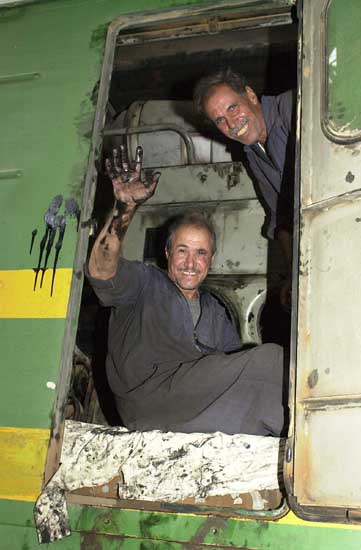 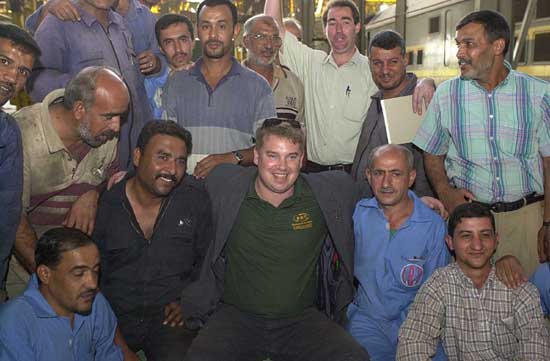 A delegation of trade unionists from Britain visited the main workshops of the Railways of the Iraqi Republic in central Baghdad on Monday 6th October to meet with Iraqi railway workers who are fighting to establish an independent and democratic trade union. The British trade unionists from the Rail Maritime and Transport Union and TSSA rail unions, Fire Brigades Union and National Union of Journalists spent over an hour in discussion with the Iraqi railway mechanics and train drivers. "After 9 April we are starting from zero. Many railway workers have returned from exile to build the railway again. They are the real heroes." admitted the works manager. During the height of the US/UK bombing some train drivers bravely stayed with their engines in the railway sheds to fight fires.

The 300 train drivers and 200 mechanics in the Baghdad central workshops have formed a new trade union committee and elected representatives for the first time in decades. At a mass meeting of 600 railworkers in Baghdad recently the US Occupation Civil Authority was angrily confronted by the newly elected rail union officials who found the US administrators in discussions with representatives of Sadaam Hussein's 'yellow union'. Despite being threatened with guns by the US military, the rail union representatives stood their ground and saw off the former Baathist goons.

These new unions face enourmous difficulties. While they have scarcely any money or resources, the terrible condition of the rail system in Iraq and the continuing acts of sabotage against the rail network mean train drivers leaving Baghdad for Basra on the daily service have no signalling system at all and rely on two way radios to regulate traffic. Bombs on the line are a daily occurence, along with pistol attacks and the US occupation authorities are incapable of securing the line. The US multinational Bechtel has been put in charge of managing the Iraqi railway sector and is in the process of privatising the industry through a series of subcontracts to British and US firms.

It has been written in the article that Saddam's men are yellow, I wonder what Blair's men or Bush's men should be called? Do you think rats is a beffiting describtion? Or shall we call them Jews/Freemasons men? May be the first one is a very good one given the simple mindness of the western brain. By the way your athiest commounist commrades are not welcomed in Iraq. Those idiots until now can not realise that their father the soviet union is dead, yet alone never been alive. So take your troops and your represantatives and your Iraqi dogs out of Iraq. Saddam could have done things in a better way but his piss is better than you and all of your leaders you blood suckers.

"The US multinational Bechtel has been put in charge of managing the Iraqi railway sector and is in the process of privatising the industry through a series of subcontracts to British and US firms."


Alex don't forget you're out there to manage the Iraqi workers transition to privatisation. Check on the viability of selling them insurance, mortgages, and loans. Do it right and you'll get a bung and your boat race in RMT news.

The fat controller at UIA

Not subduing the locals, its solidarity

What a small minded comment from "The fat controller at UIA" - Some Trade Unionists go from the UK to stand by Iraqi trade unionists - in the process they show that, in very difficult circumstances, Iraqi workers are organising, while the "ocuppying authorities" are keener to do business with Saddams old state-run unions. This is solidarity, not a sell-out. However, "the fat controller", anonymously, and no doubt for the safety of the UK, pretends he knows better.

Thansk v. much to the delegation for showing us what Iraq is like under occupation, and for building links with Iraqi unions - it puts the TUC to shame for not organsing their national delegation to Iraq.(My understnading is that George Brumwell of UCATT is pushing for this, but the TUC generally are too nervous of "security issues")

jaafer you foreign sunni scumbag. for over 30 years we iraqi's lived with your shit and looting of our country. what did we iraqis ever see from our oil under u baathi cowards? Nothing. all we ever got was war, death and torture.
So please, we are 80% and you are just 20%. Iraq is not your country. it is our's. you have had your fun. now shut up,pack your bags and run back to sunni land where you and your dogs came from.
We do not forget halabja, enfal, the marshes, nejef, kebela. basra and all the areas that you scum destroyed at will.

People like you make it harder for us iraqi's to fogive and forget,u inspire us to vent our anger at the mass graves you baathi's created.
Maybe we iraqis should return the favour. Does the idea of new mass graves around tikrit, balad and feluja sound interesting to you?
If not, then accept the change in government and shut up, you never know what an angry 80% might do to a weakened 20%.

From an iraqi. Unlike you jaafer.