The number of the dead has risen to official 58, over 200 badly injured have been treated in hospitals. Tanks and other heavy military vehicles have been moved to the city centre to shoot the rebellion. 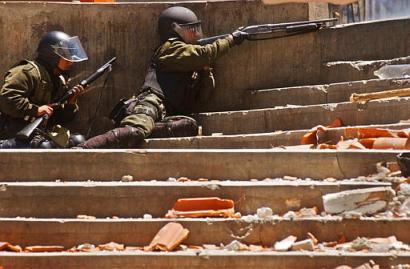 Partly heavy fights directly in front of the government's residence, and only with efforts and brutality the security forces were able to beat back the demonstrators.
The military and the police leadership have positioned themselves without doubt behind the government, whereas Eva Morales (president of the MAS, the biggest oppositional party) talked of "forces inside the military would be sick of the bloodshed".

Most of the rebels came on Monday from El Alto, where on Sunday the military has perpetrated a massacre which 26 people fell victim to.

In the meantime other trade union groups mobilise to La paz: The miners who slave away in the mines of the "president" Gori, demand their sozialisation.
The Coca- and Highlandfarmers, organised in the MAS (movimiento al Socialismo), have brought forward their mobilisation planned for Thursday.
Neighbourhood organisations of other parts of the city have also associated themselves with the protests. A posh shopping centre in the inner parts of the city has burst in flames, and the houses of policemen and the leader of the governing party have been attacked and partly destroyed.

Most of the unions, such as the transport workers union, have announced an unlimited general strike , and the public life in La Paz has been collapsed. Even the international airport in La Paz is affected, and more

Riots have also been announced from Cochabamba, Oruro and Potosi.

First conflicts loom in the group of the government: the vice-president has distanced himself from the government's policy and thereby 4 ministeres have resigned.

The USA and the OAS continue to support "their president", who is refered to as "The Gringo" in Bolivia, as he has spent most of his life in the USA, was educated there in neoliberal economy and posesses a huge mining imperium in Bolivia.

Following prognosis are imaginable for todays Tuesday:
1. the president resigns
2. the military and the police cause a bloodbath
3. the riots wane, as Bolivia is world champion in "almost revolutions"