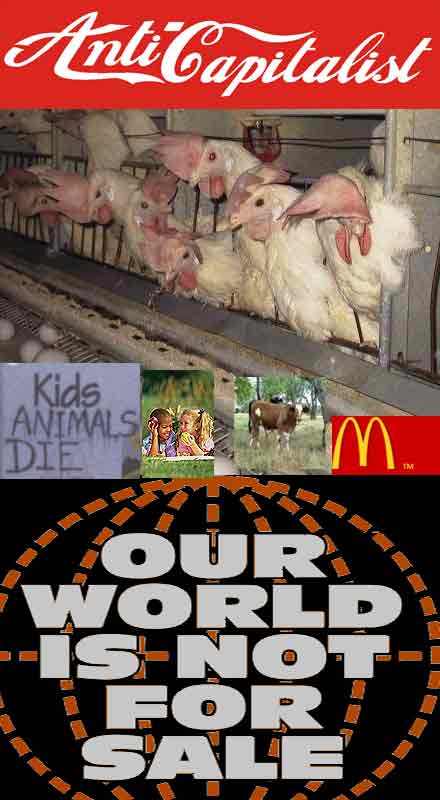 Our World is not for Sale

Clearing land for crops and livestock destroys over 12,000 miles of Brazilian rainforest each year. This is an area larger than the country of Belgium. What are they doing about it? Nothing, a few daft ads on the goggle box showing two sweaty pigs running down a street with nothing else on their minds but a big jucey dollop of chemicals, animal BI-product and toped off with a BI-carbonated soda sugar drink.
As long as Mc'Donalds keep tossing burger pate and making loads of money at the expense of the ignernent unhealthy Irish consumers they will be happy and will continue to open more so called restraunts, destroying the worlds natural resources as they go.


Over the last period Globalise Resistance has organised and actively been a part of activity both locally and internationally. We mobilised hundreds of Irish people to protest the G8 in Genoa 2001, and again at Evian in 2003 . We helped to organise marches against the racist murder of Zhao Liu Tao in January 2002, against the police violence of Mayday 2002, and organised hundreds to go to the European Social Forum in Florence in November 2002. The ESF helped co ordinate the international day of action against War on February 15th, which was the biggest protest in human history.
There is enough wealth in the world for people not to have to starve and suffer. Another world is possible.


Globalise Resistance set up a stall out side Mc'Donalds on grafton street to educate the passers by about the damaging effects that fast food culture has on humans, animals and the enviornment.
There is no difference between Mc'Donalds and Burger King, Super Macks or any other fast food companies they all use BI-product, they all try their hardest to warp the minds of young people into thinking, it is the place to be and there is delicious food here. Not true.
They all produce extra-ordanary amounts of waste and have devastating, long term damaging effects on the enviornment.
People have to take responsibility for their actions and think of where your food comes from before consuming it. Parents need to make their children aware of the harm these companies are doing on our lives. Funny thing is, alott of parents of to day have grown up in the Mc'D's culture and are oblivious of the damage it is causing them and THEIR BABIES!!!!! "It makes me sick to think that a mother would stuff the mouths of their children with such chemicals. May they think twice about eating it again in the future".

What's right about it... Some of the close up images are took of a bovine suffering from the effects of BSE 3 weeks after being diagnosed with the disease. You can clearly see the discoluration and blisters on the tongue, lips and feet of the animal.

What about all that beef that gets sent to the slaughter that may have had traces of BSE or what about all the growth hormones, tranquilizers and worm does the animal had before the slaughter. Not only that but the meat would have been treated whit bacteria, cut up and separated, frozen at very low tempiture, then further treated with colourant to give it its pink like choler oh yes it is really a dull bayish brown colour, processed and packaged and sent off to the fast food restraunts and super market shelves for consumption by the uneducated masses.

WHO ARRIVED FIRST, THE BATTERY HEN OR THE EGG?

Well the battery hen of course. Genetically altered so it could produce the most foul. Bigger is better mmmmm a lovely tender extra large chicken breast. Or maybe an egg for breakfast. Well there are plenty to go around with battery hen houses in grate numbers in Ireland producing eggs 24 hours a day. Enough is enough..
Over 100 of the world’s leading food and drink companies have chosen to locate their European operations in Ireland. Some examples of these companies are: Northern Foods Unilever Coca-Cola, H J Heinz, Grand Metropolitan, CPC International, Cadbury-Schweppes, Pernod Ricard and Nutricia.

In July 03 Food not Bombs Ireland set up shop out side Mc'Donalds at the Town Hall in Bray to hand out free food to the people who were going in to the fast food restraunt. The manager wasn't happy and had the group removed by the police for obstructing busies. A few people were saved many were lost to the foul stench that emitted out the doors the building.
Mc'Donalds in Prague... Didn't stand a chance.

Mc'Donalds Geneve. Well the flag was taken from the boarded up window and burned.

It doesn't take much to realise that processed food is bad for you no matter what you ate or what company packaged it. It is unhealthy and all that waste packaging, where dose it go?
Fruits and Vegetables are wholesome, very good for you physically and mentally and there is no waste. There are so many varieties of fruit and vegetables out there you can't get bord of the selection and add all varieties of grains, herbs, spices, nuts and berries. When you add all the combinations together you get the taste that you only dreamed of when you slurped around the greasy ham burger tray thinking, that never filled me at all.
Fast food - Fruit and Veg, can't be faster. Throw em all in a pan with water add spices. Its done. Enjoy.

Heads In The Sand

For those whose idea of anti-capitalism has something to do with class struggle:

Unfortunately it appears some of these burger flipping plebs have gone beyond trade union consciousness so lets pretend that organising drive has never happened. Bloody Trots.

I just find it a bit contradictory that this film demonises McDonald's but the author's have no problem using Microsoft's Window's Media encoder to put the video on-line.