"You Should All Be Worried"

"You should all be worried because, what happened to my brother Leon could happen to anyone". These were the words of Stephanie, Leon Patterson’s surviving twin sister. Leon died in custody on 27 November 1992 in a Stockport police cell. So far, after twelve years of legal battles and a verdict of unlawful killing, no police officer has been convicted in relation to this incident.

Stephanie was one among many family members who attended the fifth national demonstration organised by the United Families and Friends Campaign (UFF) on October 25th in Trafalgar Square, London.

The UFFC was set up in 1997 as a coalition of family and friends of black and white people who have died in police custody or in psychiatric hospitals. The campaigners seek judicial justice for the family of the victims, demand the end of "institutionalised killings" and want the basic human rights of their communities to be upheld. 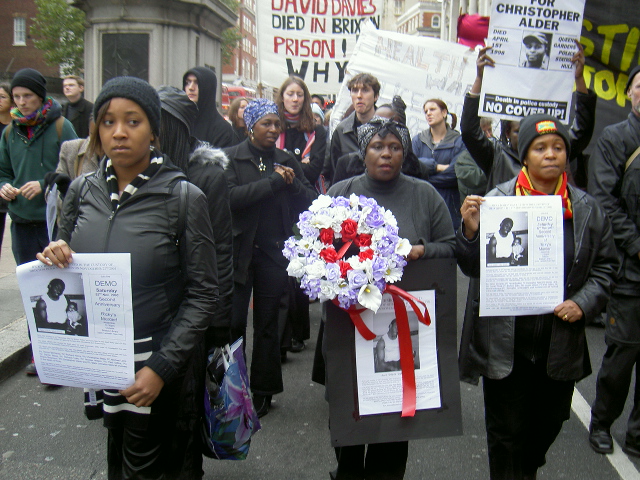 About two or three hundred people all wearing black gathered in Trafalgar Square where family members shared the disturbing stories of their daughters', brothers', sons' and cousin's brutal deaths.

After the speeches the procession made its way to Downing Street where a delegation of relatives delivered a petition letter to Tony Blair. In the mean time, other family members attempted to rest two wreaths of flowers by the gates of the ministerial house. This, was only accomplished after negotiations with the police who quoted anti-terrorist laws and claimed that the flowers might have caused a safety hazard.

The remembrance ceremony ended with more speeches by the relatives including Myrna Simpson, mother of Joy Gardner. Myrna’s daughter was violently restrained in her home by immigration and police who then suffocated her to death by wrapping 13 feet of surgical tape around her face. The incident took place in front of Joy's five and half year old son Graham.

"The police must learn that they are not above the law"
"How would you like your father, mother, son, daughter to be killed... to be taken naked to hospital...."
(Myrna Simpson)

Myrna and the other family members are seeking justice. Up to date not a single police has been convicted for any of these crimes.

The demands of UFFC are:

Some of the stories of those who died in custody (Brian Douglas, Wayne Douglas, Shiji Lapite, Ibrahima Sey and Joy Gardner among others ) and the struggle of their families to get justice are portrayed in Injustice, a powerful documentary by director Ken Fero.