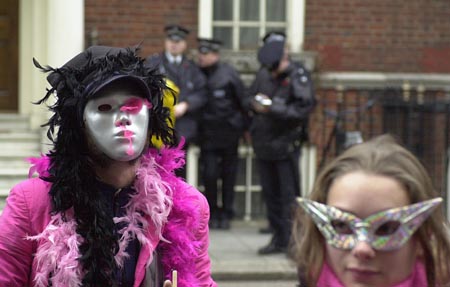 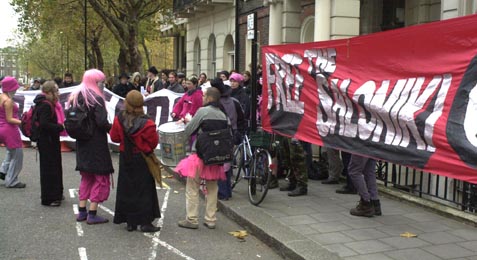 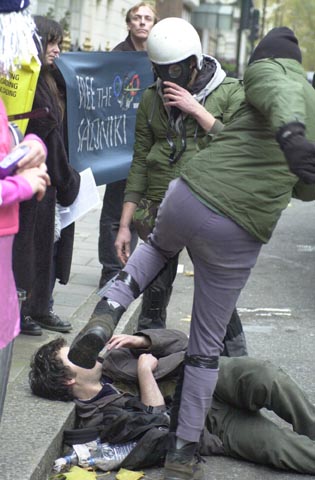 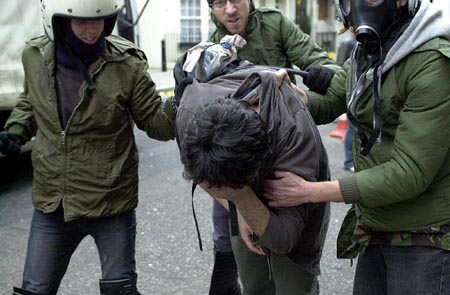 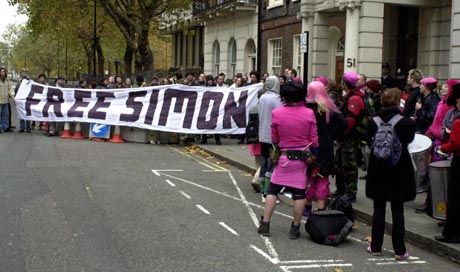 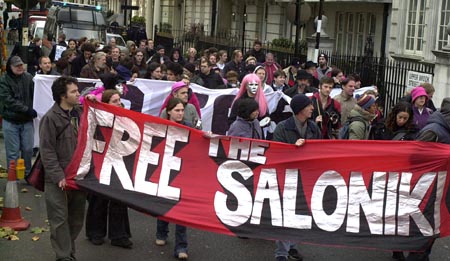 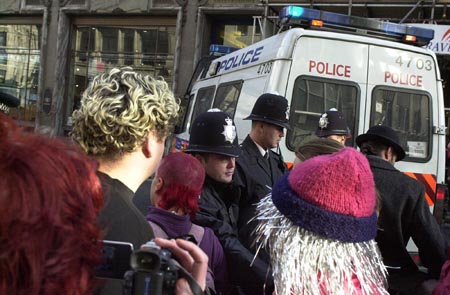 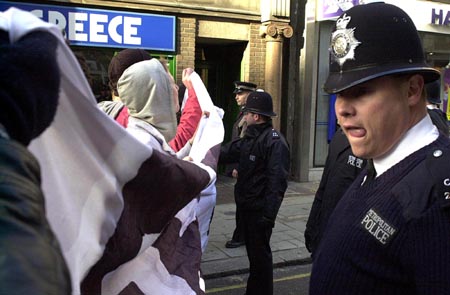 Good to see a decent turnout and the spontaneous walkabout was a lot more visible than just staying put! Just a shame about the idiot with blond hair and glasses who kindly took it on himself to be our "leader", falling over himself to accomodate the cops and spouting on to the media about how Greece is part of Europe and so should respect human rights...Not to end on a moan though- it was a good demonstration of solidarity with the Thessoloniki prisoners!

Fortunatelly we marched on the streets otherwise we would just stay out of the greek embassador.Thank the girl from greece who encouraged us and gave us the idea to do a right demonstartion....also that she made up slogans for us for the 7 prisoners sometimes we need to have more direct actions!!!!

i guess what u mean by "falling over himself to accommodate the cops" is when, at the end of the demo, after we had successfully marched to the tourist board and the cops lined out to stop us going onto regent st, instead of fighting them and trying to push thro, as at least one person i saw did (lemme guess, it was u, 123!) which provoked them to pull out the sticks, sensing the mood was about to turn significantly darker, i loudly advised everyone to turn around and leave the way they came, while they were still able to - it's 1 o'clock, end of demo, let's have a drink or go home. i did this as an individual, not representing the group and certainly not as any kind of leader, just someone who realised what a dumb situation a couple of over-excited clowns who didn't know any better were getting us all into. it was a timely idea that luckily was quickly taken up; again, not because i claim to have any authority over anyone else, but because other people, individually, thought it was a good idea.

and what was the alternative, a fight with the cops? breaking thro white-block-style into regent st? end up arrested, or penned in for a few hours? well, it might've made some of us feel a little stronger, a little less impotent perhaps, for a while, but it's obvious that would've been tactical suicide and probably caused irreparable harm to our campaign to free the thessaloniki 7. in case anyone doesn't understand why, let me spell it out for u: we are campaigning to have simon and the others freed because they are peaceful demonstrators who were fitted-up by greek cops. the crucial point being that simon would never have been carrying a bag full of molotovs; in his own words, that's just not his style. now what do u think the right-wing press would've made of a demo of his supporters that turned violent? we'd all be made out to look like thugs and the implication would be that if his supporters are violent thugs then it's quite likely that he is as well. nice one!

and to clearly see why violent protest would be suicide for the whole campaign, consider this. how many families with kids, or little old ladies, or in fact anyone outside our activist ghetto, would come along to the next demo if the last one turned nasty? and yet that's exactly what we need to maximise the pressure on the greek and british governments - more people and not just the hard-core usual suspects. also, think about what would happen to the support from our friendly MEP and the folks at Fair Trials Abroad. yeah, it would disappear, along with any chance of being able to make a difference to simon's case. the media would turn on us, we'd look like clueless hypocritical hooligans, and all the work that we have been tirelessly doing would be wasted. and for what? because a couple of people decided that the picket and the march wasn't enough for them, and for purely selfish reasons started to get aggressive and take out their frustrations on the cops (please, i challenge u to explain how a fight would have helped simon's cause one bit, i'd love to hear your justification.)

as for spouting on to the media, well it's true someone from dutch indymedia asked me to say a few words into her microphone, which i was happy to do. again, not as any kind of leader, or spokesman, but as an individual, a part of the campaign and a friend of simon who cares enough about him being released to be disciplined enough act in his best interests, even if it makes me feel uncomfortable (i hate giving interviews!) - one more thing, greece actually is part of europe and as such is bound by european human rights conventions. simon has blatantly been denied his human rights, but so far no-one in authority seems to care. europe has a parliament which is made up of MEPs, one of whom has recently taken up simon's case and who can bring the kind of pressure and embarrassment on the british and greek governments we couldn't possibly hope for on our own. now, for me this is as obvious as 1+1+1=3, but if u still cant see the connection here, then i dont think i can help u.

but i do ask u this: if u have some beef with me (which u obviously do) why not just bring it up directly, face to face? why instead do u bitch about me on the internet, like, personally describing me? u think that's gonna make things better, gonna help our cause? again, a tactical error on your part, but unfortunately not your worst. but let's try and put all this bullshit behind us and concentrate on freeing the thessaloniki seven, and if u've got a problem with seeing either the media or even - shock, horror - the police as allies in this, well, come up with a better plan. peace!

you had me till the end.

Very well said. Unfortunately though, I don't think that the police will ally with protestors of any stripe, nonviolent or not, anytime soon. On either side of the Atlantic, their duty is to protect capital and the power elite (couched in terms like 'keeping the peace' aka 'the status quo'). I totally echo your thoughts on the tactical considerations of nonviolence, especially as it relates to the whole point of the protest, which deals with a nonviolent activist.

I just found out about this whole case today. Keep up the great work over there!