Picket of Greek Ambassador in Support of Saloniki hunger strikers after week of action.
Interim report:) 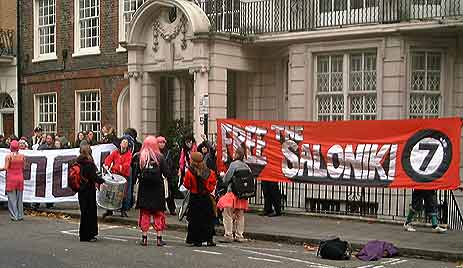 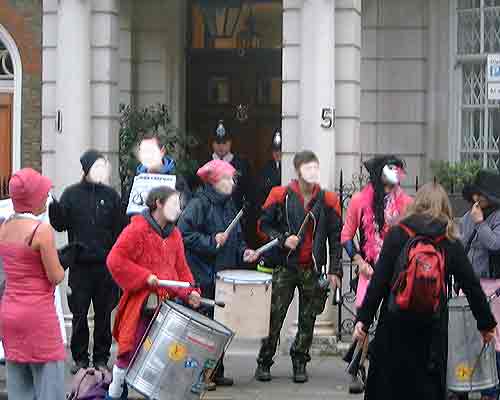 this should get him out of bed 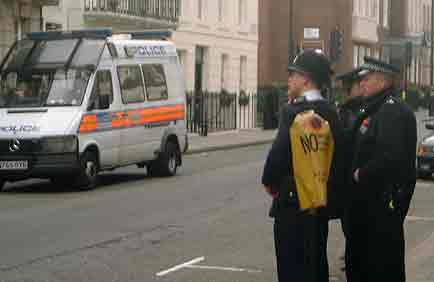 under the eyes of plod 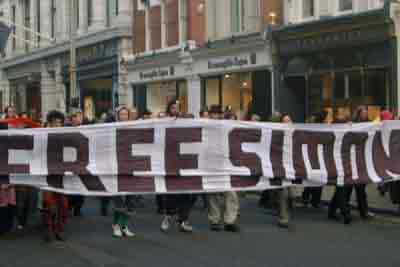 The Greek ambassador had a reception he didn’t except today at his London residence.

In solidarity with the Thessaloniki 7, five of whom are on hunger strike, and international days of action in Athens, supporters picketed his domain near the US embassy. Naturally the ambassador refused to answer the door to answer the protestors questions, nor to receive his almost empty box of ferrero roche chocolates ( which had been replaced by demands to free the Saloniki 7 ).

Members of the gas mask theatre co. staged a re-enactment of the arrest and the crowd chanted to the Rhythms of Resistance Samba Band. An impromptu march to the Greek tourist board off Regent Street completed the picket. Bond Street was temporarily blocked with positive reaction from many people ( a couple of fleeing idiots in suits were heard to cry that it was the Animal Liberation Front - can't you read? )The bully boys of the Tactical Support Group G were waiting with batons raised here and assaulted a few of the marchers as the they decided to cordon the area. Some police attempted to search others leaving the scene. Unfortunately for the tooled-up and obviously hungry for aggro police – the protest was non-violent.