Anti-war campaigners in Calderdale, West Yorkshire, today created a dramatic representation of the chasm existing between a just peace and George W Bush’s policy of war.

An effigy of the US President was symbolically toppled from Stoodley Pike, a famous local hill top landmark and a monument to peace. 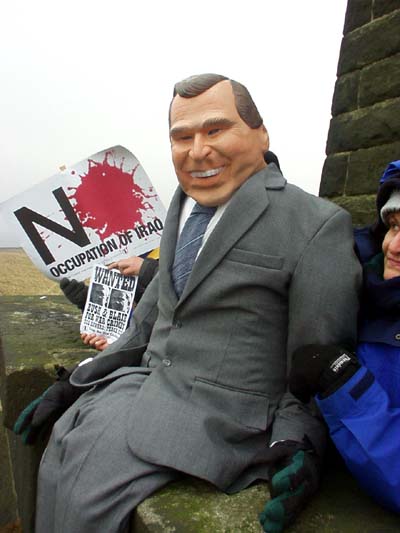 The effigy of Bush on the gallery of Stoodley Pike 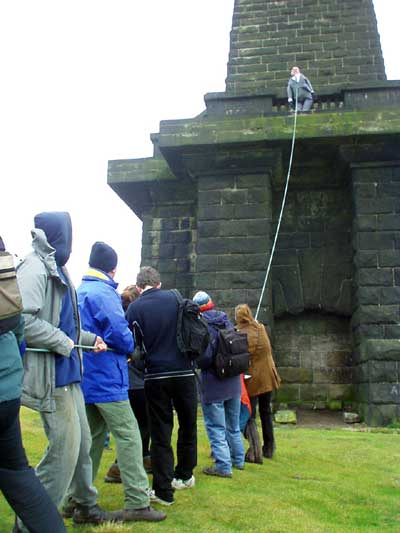 George bush about to be toppled 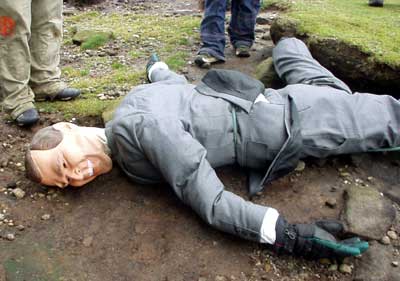 The twisted remain of the hated despot

The event was designed to express the anger and dismay felt at the forthcoming State Visit of George Bush on 19th –21st of November.

Demonstrations will be taking place throughout the country, with a protest & vigil in the centre of Hebden Bridge on Wednesday 19th November, 5-6pm, at the main traffic lights. There will be a national demonstration in London on Thursday 20th November. Transport is being organised from Calderdale. Call Juliet on 01422 340967 for details.

Stoodley Pike stands at around 400m on a prominent hill overlooking Todmorden and Hebden Bridge, in the Upper Calder Valley, West Yorkshire. The Pike is a monument 120 feet high, originally built in 1815 to celebrate the outbreak of peace at the end of the Napoleonic Wars. The fate of the monument seems somehow to have been interlinked with conflict. In 1854, when the Crimean War broke out, the monument collapsed. It was rebuilt in 1856 when peace was declared. It had to be repaired at the start of the 20th century when part of it collapsed the day before the end of the First World War. As a monument to the outbreak of peace, it is a fitting location for the toppling of Bush.

A spokeswoman for Calderdale Against the War said:

“We refuse to welcome the man behind an unjust war which has killed, and continues to kill civilians and soldiers of many countries.

Having presided over this violence and destruction, George Bush’s administration has now allowed powerful multinationals to move in for the spoils.

Without consent from the people of Iraq, the occupying force is seeking to sell off Iraq’s essential services. This privatisation means that foreign firms can make profits which they are then free to siphon out of an already impoverished country. This is in violation of international law governing the behaviour of occupying forces.

The international companies and financiers who supported the Iraqi regime now seek to recover their billions at the expense of the very population Saddam oppressed.

People in Iraq are entitled to the conditions in which they can determine their own future, and can rebuild infrastructure and services like health and education. By opening the way for profiteers, George W Bush is undermining the creation of these conditions and threatening the future of Iraq’s people."

Iraq has a debt of at least $200 billion, possibly much more. Revenue from oil sales is less than $15 billion.

Iraq’s debt comes from foreign loans, war reparations and broken business contracts. Saddam Hussein’s regime borrowed money to build palaces and monuments but it also got debts of $76 billion buying weapons and defence equipment from companies such as Marconi, Racal and Thorn EMI

Repayment of this debt would hamper reconstruction and cripple the Iraqi economy for decades.

Jubilee Iraq, founded by Iraqis and citizens in creditor countries, calls for:

·Cancellation of all odious debt, which benefited Saddam but not the Iraqi people.
·Debt negotiations that are fair and include a strong Iraqi voice.
·A complete moratorium on payments until negotiations are complete.
·A large enough reduction in debt to allow Iraq to recover and prosper.

Public Sector layoffs in Iraq have led to 70% unemployment. Paul Bremer’s economic reforms included the privatisation of 200 state owned companies, allowed 100% foreign ownership of banks, mines and factories; and allowed these firms to move 100% of their profits out of Iraq. The economist declared the new rules a “capitalist dream”. Source: Naomi Klein, The Guardian, 6/11/03