Why I'd go to prison (Kate Holcombe) 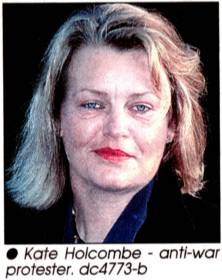 A large peaceful vigil outside Gloucester Crown Court is being planned to remind people of the ongoing occupation and loss of lives in Iraq.

Kate Holcombe of West Road is accused of pulling down and damaging the main gate at the Fairford Air Force Base during an Iraq War protest on February 23 this year.

The 43-year-old mother and two other defendants, are accused of causing thousands of pounds worth of damage to the main gate of the air base in the course of a large demonstration against the Iraq war.

During the protests dozens of demonstrators found their way onto the airfield and were pursued by the MOD police before being ejected.

Divorcee, Ms Holcombe who works in Broadway as a personal assistant is undaunted by the threat of the court case hanging over her.

She said: “I have been to court half a dozen times before so I am not very nervous. The whole point of the exercise is to get as much publicity as we can. If I get six months in prison it will be worth it.”

Since the incident earlier this year, Ms Holcombe says she has continued to organise peaceful, non-arrestable protests seeking to raise the issue of American use of British bases to attack other countries.

Ms Holcombe, mother of two sons aged 23 and 16, said it was important to protest now against the Iraq war, because in 20 or 30 years time it will be too late.

She said: “The biggest risk to world peace and security is the United States. After September 11 we were all waiting to find out what they would do next. They have caused misery in Afghanistan as well as Iraq and if we go on like this, fundamentalists will be coming here and blowing up our children.”