NATO Command Bunker Under Our Feet: A Bristol Indymedia Exclusive
To most of us it's just another chain link fence off the road from Bath to
Chippenham, but investigative journalist Duncan Campbell believes the
underground Corsham Computer Centre houses a top-secret and top-level NATO
command post. Recent anonymous reports by contract workers who have been
deep underground say a gigantic new U.S. computer system has just been
installed. And the Ministry of Defence press office still have the cheek to
deny that there are underground facilities in Corsham. So are the U.S.
Department of Defence and our MoD hiding from Al Quaeda... or from the
public who pay their wages? Phil Chamberlain takes a peep down this and
some of their other nearby multi-billion pound rabbit holes. 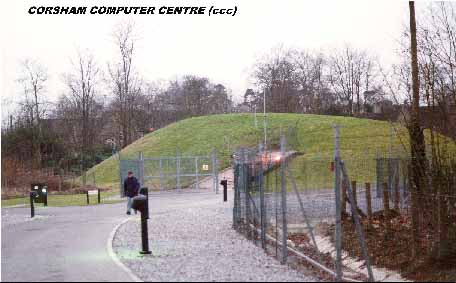 For conspiracy theorists it is Britain's own Area 51. The American version
has become such a fixture on the cult circuit that there are burger bars
selling alien snacks and motels offering the best viewing points to see
America's secret aircraft take off and land. But Britain's secret base has
no such post-modernist trappings, just a few dedicated enthusiasts swapping
tit bits on the web and a typically humdrum Ministry of Defence location.

The warren of tunnels around Corsham and Box near Bath have been home to a
number of military bases since before the Second World War. Most utilised
the quarries which fed the stone that made the city famous and was exported
across the world. The mine workings link up in some cases with the military
bases and the whole network spreads for miles with entrances dotted around
the hills - some quote large and others no more than a rabbit hole in the
ground.

Stop off and have a drink at The Quarryman's Arms near Box and you will be
able to buy a map put together by University of Bath cavers which gives a
guide to the mine workings. Be warned though that it is easy to get lost
only yards from a tunnel entrance and much of the workings have not been
rendered safe.

For the military, the tunnel's position was far enough away from London not
to attract attention yet still only a few hours from the capital and with
good rail links and the Bristol port all within easy reach. Indeed the rail
links remain with rumours of secret sidings on the mainline route as it
passes through various tunnels connecting military gauges with the public
network.

The tunnels were home to a number of stores, mostly ammunition, during the
last war. Local author Nick McCamley has charted the development of these
underground works in his book Secret Underground Cities. And cities is an
apt word.

The sites beneath the hills included an underground aircraft engine
factory, operated by the Bristol Aeroplane Company. It was home to 18,000
workers, covered three million square feet between Corsham and Box and
contained around 60 miles of subterranean tracks.

Another, the Central Ammunition Dump at Corsham was the biggest of its kind
in the country. One of the three parts of the CAD was actually nearer
Bradford on Avon, and based at Monkton Farleigh Quarry. The biggest
ammunition store in the world at the time, it covered 45 acres of
underground space and had a maximum capacity of 120,000 tons of ammunition.

Also making up the CAD was Tunnel Quarry, a 40 acre air-conditioned
ammunition store on the north side of the Box tunnel, while the third
quarry, Eastlays, occupied 30 acres near Gastard, south-east of Corsham.
The security of the sites can be gauged by the fact that many important
works of art were shipped there for safe-keeping during the war.

Go for a drink at the Cross Guns at Avoncliffe and look at the hill above.
During the war, inside that hill, sat the Crown Jewels, the Elgin Marbles
and various other treasures from London museums.

The military works provided employment for thousands of local people
before, during and after the war. Little was officially known about them
because, in that typically reserved British way, the sites were secret.
Local gossip certainly gave clues to the scale of the operations and many
people have their own urban myths about the tunnels. One is that all the
cellars under Bath's central Milsom Street link up and a direct route -
past the former Admiralty headquarters in the city - went straight to Box.

But apart from tall tales told in pubs the sites remained secure - a few
air vents and vehicle entrances the only outward sign of their existence.
There was a price to be paid for some of those workers who toiled
underground. Asbestos was used to line the walls of the undergrouns
offices. An inquest held in 1999 into the death of 81-year-old Ada Harding
from Corsham found she had died from a cancer caused by inhaling the deadly
fibres. Coroner's officer Douglas Hills told the inquest: 'The entire
complex was piped, the piping neing lagged with asbestos. Very large
quantities of blue asbestos sheeting were used.'

Mrs Harding's daughters both worked for the MoD in their underground
facilities. One, Carol Boon, said: 'People liked working underground and
they had all the facilities there. They really enjoyed it.'

One of the more astounding secrets the government kept hidden was that one
part of the network was identified as a Cold War government bolt hole in
case the bomb ever dropped.

Called Burlington, the bunker was equipped to house 5,000 people and had a
hospital, bakery and laundry. It replicated Whitehall down to a version of
the famous Red Lion pub which sits on the corner of Parliament Square in
London. That bunker was finally decommissioned in 1989 and various other
sections are gradually being sold off of retired.

Indeed a science park is planned for one above-ground section at Rudloe and
Spring Quarry is being turned into a film studio. Other parts are used as
warehouses for storing senstive items in the temperature-controlled vaults
by a private company. But parts of the rest of the site remain in
government hands. It is this part, and specifically the Corsham Computer
Centre (CCC) near the former RAF Rudloe Manor base, that has attracted
attention from conspiracy theory minded investigators.

On the one hand you have mainstream groups interested in mapping and
documenting the military history of Britain and they work with the tacit
approval of official agencies. Then there are the more esoteric groups
which believe much remains hidden and still active beneath the hills.

The RAF's involvement, it used to have signal facilities at Rudloe, has led
to suggestions that it was Britain's UFO headquarters and that the staff
based at Rudloe were on alien-watch.

Meanwhile investigative journalist Duncan Campbell paid a visit to the CCC
which be believes is a secretly-funded NATO nuclear command centre. Less a
base for friends from outer-space more your old-fashioned 'black' project -
built away from the prying eyes of Parliament and one of a number of Cold
War nerve centres.

Various enthusiasts have made life less humdrum for the military police at
the CCC by attempting to get into the base which is officially no more
interesting than its name.

Much of what remains underground is, pardon the pun, buried from official
scrutiny and since Campbell's original claims there has been little hard
evidence to show that anything too elaborate is going on. But then it took
decades before anyone found out about Burlington. And there are still
plenty of rumours being told at the pubs around these Wiltshire hills.