George gets ready for an exciting few weeks

Five years ago, only a very few die-hards would have crossed a street to spit on G.W. Bush. How times have changed! These days, he is hated and feared by billions of people all over the planet. As people in Cambridge drop banners from bridges and set up film screenings in preparation for the Bush state visit (19-21 November), let's take a quick look at what George will be doing over the next few weeks... 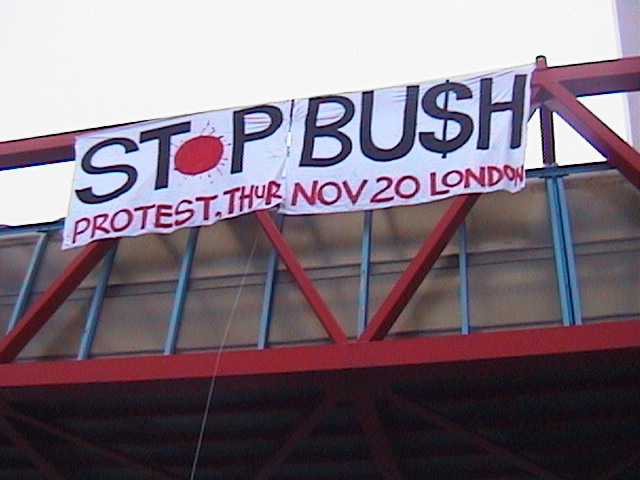 George is in major trouble at home over the poor state of the U.S. economy, ongoing casualties among U.S. troops in Iraq, and the recent $87 billion budget appropriation needed to sustain the occupation of that country. The strange result: the ruler of the current world empire will visit the reigning monarch of the previous world empire in an attempt to bolster his domestic support, during a visit to London, England, scheduled for 19-21 November. George's visit presents a major political opportunity for the anti-war and anti-corporate globalization movements in Britain; as an American citizen said in a recent comment on the Cambridge Indymedia newswire, "If America's closest ally, Britain, can raise holy hell when Bush comes to visit, that can send us a strong message. Because if he isn't welcome in Britain of all places then where? And what does that say about America? A lot. It will say we need to take a few steps back, look at ourselves and re-evaluate the approach we take to global affairs..."

After tea with Tony and the Queen, George will pack his suitcase and head to Miami, where he will be taking part in the fifth Summit of the Americas on the 20-21st of November. The summit process is an attempt to overrule democracy in the western hemisphere by signing an agreement implementing a "Free Trade Area of the Americas." The FTAA is a bill of rights for the rich, and allows corporations to sue local and national governments for putting up "barriers to trade" - things like labour, safety, and environmental regulations. During the third summit of the Americas in Quebec City in 2001, George was greeted by hundreds of corporate executives, tens of thousands of protesters, widespread streetfighting, and the smell of corporate 'democracy' wafting from the 5148 canisters of tear gas used by police on demonstrators and local residents. In Quito, Ecuador, during the fourth Summit of the Americas in 2002, demonstrators broke through the security cordon into the negotiating rooms and roundly told off Bob Zoellick, the head U.S. trade negotiator, for his nation's destructive trade policies.

With the recent defeat of the U.S. and European Union at the World Trade Organization summit in Cancun, Mexico, the fifth Summit of the Americas is shaping up to be quite an interesting political event. As George's heavily militarized police force prepares to confront the thousands of demonstrators who are now converging on the city, there are mixed signals coming from the governments of Brazil and Venezuela as to whether they will sign on to the FTAA, and the governments of Argentina and Bolivia have been crippled by major political instability stemming largely from neoliberal economic reforms. A second major collapse in trade negotiations in only three months would be devastating for the corporate agenda which George enthusiastically represents, and a major victory for the forces of global civil society.